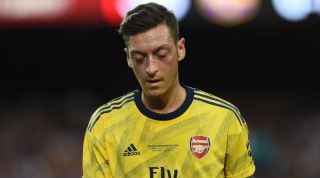 The 31-year-old has registered 32 goals and 52 assists in 168 games in the Premier League.

However, since Unai Emery took over from Arsene Wenger, Ozil's involvement has been limited.

And at the start of the current campaign, Ozil was fell victim to an attempted armed robbery along with his teammate Sead Kolasinac.

The incident was reported to have shaken the pair and Ozil's wife who was also present.

Ozil got married to Amine Gulse last summer, but according to Nicklas Bendtner, he was far from the settling type when he first joined the Gunners.

In Bendtner's new book 'Both Sides' (as reported in the Mirror), he reveals how Ozil had a penchant for meeting ladies in nightclubs.

"Without going into detail you can safely say that there is something about the talk that Ozil was a bachelor," Bendtner writes.

"During his first week in London we took the trip three times.

"He does not act crazy or particularly demanding when he is out, but he knows how to fire it. And like so many others, he loves ladies. No doubt about it."

Bendtner tells of how Ozil came to him for guidance with regards to the London nightlife and that it wasn't the first time his services had been requested.

"On his second day at Arsenal, he visited me at training, saying 'I hear you're the go-to guy if you want to look around in the nightlife?' 'It's not entirely wrong,' I replied," Bendtner claims.

"There are so many who make use of my local knowledge. I almost become a kind of concierge for my team-mates."

Bendtner now plays his football in Copenhagen back in his homeland, after a string of short-term stints across Europe.

He believes the perception of Ozil as being arrogant is skewed.

"Many people describe the guy as a bit arrogant,' he continued. "But that's not my experience.

"He is just quiet by nature and it can confuse people. That he holds both sides. I understood it. There are always two sides."

Can Antoine Griezmann ever thrive in Lionel Messi's Barcelona?