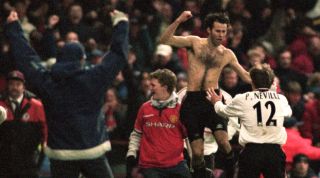 In 2004, both Tottenham and Manchester City were the flakiest of outfits. In this fourth round replay, Spurs charged into a 3-0 half-time lead and City's bad boy midfielder Joey Barton was dismissed at the interval for behaving like... well, Joey Barton. Hordes of City fans headed for the exits.

But in the second half, 10-man City launched an epic comeback. Sylvain Distin reduced the arrears on 48 minutes, then Paul Bosvelt struck No.2 with a deflected effort 20 minutes later.

As the jubilant City team celebrated with the supporters who'd stuck around, Tottenham fans disappeared sharpish into the north London night. "I'm speechless," admitted Kevin Keegan, possibly for the first time ever.

In maybe the most insane FA Cup replay ever, four players were sent off, eight others cautioned, and Leyton Orient’s Jonathan Tehoue and Scott McGleish both hit hat-tricks as the Brisbane Road side stormed back to end Conference North side Droylsden's FA Cup dreams. They'd initially drawn 1-1.

A second-round giant-killing appeared to be on the cards when the Bloods struck twice through goals from Ciaran Kilheeney and Alex Brown, and Orient's Terrell Forbes was sent off. That all happened within 54 minutes, and it was how things stayed until the 77th.

Orient netted twice before the final whistle to force the match into extra-time, however, and after Droylsden’s Les Roche was sent off (following the 89th-minute red for Orient's Ben Chorley), the visitors imploded. Tehoue added two more goals and McGleish three as the hosts ran riot to emerge 8-2 winners.

The match which launched John Motson's career, and sparked the most celebrated pitch invasion in FA Cup history, was a third-round replay eventually played on the Saturday of the fourth round.

Following a 2-2 thriller at St James' Park and some horrendous weather, non-league side Hereford United had to wait more than three weeks to bring their Division One opponents back to Edgar Street for the replay.

Malcolm Macdonald's towering header appeared to have won it for Newcastle, but Ronnie Radford's unfathomably good 35-yard screamer in the mud tied up the scores at 1-1. Substitute Ricky George then netted an extra-time winner in what remains arguably the most famous and evocative upset in the competition's history.

This eight-goal, fifth round replay thriller remains arguably the finest Merseyside derby ever. Liverpool went ahead four times thanks to strikes from Peter Beardsley (two), Ian Rush and John Barnes.

Beardsley's second goal, and Barnes's majestic curling effort reflected the qualities of a Liverpool side at their most vibrant. But the Toffees, playing a formidable pressing game, stuck manfully to their task, with Graeme Sharp (two) and Tony Cottee (two) taking advantage of hesitation in the Liverpool backline to claw Everton back each time. "I thought the roof was going to come off Goodison Park that night," admitted Cottee.

Everton won the second replay 1-0, but by then Kenny Dalglish had resigned as Liverpool's manager. Although his team hadn't won the tie, it was a spine-tingling way to bow out.

It was surely the greatest FA Cup semi-final replay ever. And the very last. Under the Villa Park lights, Manchester United and Double-winning Arsenal – the country’s two best sides in that era by a mile – went hammer and tongs at one another for 120 pulsating minutes, after tieing the first encounter 0-0. The pace was furious and the play of the highest quality.

David Beckham's inch-perfect shot put United ahead, before Dennis Bergkamp equalised with a deflected strike. Then came the real drama. Seconds from the end of normal time, Phil Neville hacked down Ray Parlour inside the 18-yard box, but Peter Schmeichel clawed Bergkamp's penalty away.

Then, in extra-time, Ryan Giggs ripped past Arsenal's tiring backline and smashed a coruscating shot past David Seaman; the Welshman's bare-chested celebration that followed is the most iconic ever seen in the old competition.

It was a sliding doors moment: United powered on to win the Treble; Arsenal left the season empty-handed.

If ever an FA Cup match wasn’t a portent of things to come in the replay, it has to be the 1981 FA Cup Final. The first match ended in a dull 1-1 stalemate at Wembley, with Tottenham's inconsistent Argentine midfielder Ricky Villa substituted after a wretched display.

But Spurs boss Keith Burkinshaw promised Villa that he would start in the Wembley replay, and the White Hart Lane supremo's faith was repaid a few days later. Villa swept the ball past Joe Corrigan for his side's opener, before Steve Mackenzie's sensational volley and Kevin Reeves' penalty gave Manchester City the lead.

Garth Crooks hauled Tottenham level, but Villa grabbed the glory with a superb individual goal. After picking up the ball on the left touchline, he slalomed his way past City's tiring defenders before slipping the ball home. It remains one of Wembley's most famous goals, but more importantly it won the cup in superb style.

Barnsley endured a difficult 1997/98 season, in what proved to be their only Premier League campaign before returning to the second tier of English football.

The highlight of the season came on the night they beat champions Manchester United 3-2 at Oakwell in a fifth round replay. Having been controversially denied a penalty at Old Trafford which would have given them victory, Danny Wilson's side – roared on by a raucous Yorkshire crowd – set about United at home.

John Hendrie gave them the lead early, before Scott Jones – only playing thanks to injuries to four defenders – made himself a small-town hero by planting two goals past Peter Schmeichel.

Teddy Sheringham and Andy Cole scored either side of Jones’s brace to make it interesting – but Wilson's men held on to nab a deserved quarter-final clash with Tottenham. Alex Ferguson magnanimously paid tribute to the passionate Oakwell crowd, describing the supporters as “being like a 12th man”.

Given John Aldridge's side's propensity for seeing off top-flight opposition (Southampton became the seventh top-flight club to be bundled out of a cup competition by the Wirrall men), perhaps it wasn't such a surprise that Glenn Hoddle's side were sent packing back to the south coast with tails between legs.

But it was the manner of the defeat which made this a classic. Hassan Kachloul, Jo Tessem and Dean Richards put the Saints 3-0 up, and but for wasteful finishing it could have been 6-0 to the visitors.

But after the mother of all half-time bollockings from Aldridge, Tranmere came out fighting. Ex-Everton star Paul Rideout plundered a hat-trick, before fellow former Toffee Stuart Barlow grabbed the dramatic late winner to send the Prenton Park club to the quarter-finals against neighbours Liverpool.