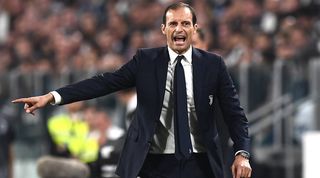 Allegri is currently fighting a two-horse race with Napoli at the top of Serie A as Juventus chase a seventh successive league title – and a fourth under the 50-year-old. But could it be time for the Italian to explore pastures new?

Allegri began his managerial journey at fourth-tier Aglianese and landed the Milan job seven years later in 2010, delivering a first Scudetto since 2004 in his debut season. But the road was slippery thereafter: he came under fire for letting Andrea Pirlo join Juventus for nothing that summer as Milan's league position deteriorated, and was fired in January 2014.

Naturally, he joined Juve and has won the league and Coppa Italia in each of his three seasons, also reaching two Champions League finals.

Allegri is praised for his tactical flexibility: he often switches between a back three and back four. His teams are strong in possession and solid in defence, and the evidence suggests he could well be a suitable fit for Arsenal. In 2012, though, Allegri stated he would retire from management by 55 and wishes to take charge of the Italian national team before then.

At one time the favourite to replace Wenger, according to newspaper reports earlier this year. Ancelotti is available having been sacked by Bayern Munich in September and boasts a winning CV that would doubtlessly appeal in the Emirates Stadium boardroom.

In eight years at Milan he won one Serie A, a Coppa Italia, two Champions Leagues (and reached another final) plus a Club World Cup. After 423 games at San Siro he joined Chelsea in 2009, where even winning wasn't enough. Despite a Premier League and FA Cup double in his first season, Ancelotti was sacked after his second having steered the Blues only to second (the horror!) behind Manchester United.

A year-and-a-half at PSG brought inevitable domestic silverware, as did his most recent spell in Germany, but European success was delivered where it was craved most – at Real Madrid. Ancelotti accomplished that in his first season, winning the club's 10th Champions League, but failed to repeat the trick in 2014/15 and was out.

The Italian is respected for his mentoring of players, who often flourish under his guidance – but do Arsenal's players need more than just an arm-around-the-shoulder type?

Although Simeone extended his contract last autumn to 2020, he remains one of the favourites for the Arsenal post. His full-on, aggressive style is the binary opposite of Wenger’s, but that could be exactly what this crop of Arsenal players needs to start challenging for league titles again.

Simeone has consistently kept Atletico punching above their weight with teams greater than the sum of their parts, creating a third rival for Real Madrid and Barcelona that hadn't existed for a decade.

Lifting the Europa League trophy after half a season in charge was a sign of things to come: as well as steering Atleti to the 2013/14 title, the Argentine has also reached two Champions League finals – an astonishing achievement for a team that was mid-table in La Liga upon his arrival.

El Cholo has shown little desire to leave Madrid over the last seven years, but perhaps the chance of a huge project like Arsenal – who his Atletico side face in the semi-finals of the Europa League - could appeal. There'd certainly be plenty to sink his teeth into.

Low’s Germany side are among the favourites to win the World Cup again in Russia this summer, and a successful defence could be the perfect opportunity for the 57-year-old to move on. He has produced consistent performances from his side over 12 years in charge, and his attacking football would surely appeal to the Arsenal faithful.

Low was appointed Germany manager in 2006, earning a promotion from his role as assistant to the departing Jurgen Klinsmann. In his five major tournaments, Low has lost three semi-finals (2010, 2012 and 2016), one final (to Spain at Euro 2008) but did win the World Cup in 2014 thanks to Mario Gotze’s extra-time goal.

His career in management started when he became player-manager at Frauenfeld in 1994, before mixed success with spells in Germany, Turkey and Austria earning him the job under Klinsmann in 2004. It is that success and experience, in particular, that may give him the edge on some other more popular but unsuitable options.

The 44-year-old German shot to prominence when he replaced Jurgen Klopp at Borussia Dortmund in 2015, tasked with revitalising an underperforming team. He switched formations regularly and got the best out of his squad – particularly Pierre-Emerick Aubameyang, now with the Gunners.

Dortmund finished second in 2015/16 and third the following year. But despite winning his first honour with the DFB-Pokal in May 2017, he was sacked three days later.

Tuchel's first job, at Ausburg II, came in 2007 – a decade after his nondescript playing career had ended. He impressed and was rewarded with the Mainz job in 2009, guiding the club to ninth in his first season. Acquisitions of future Premier League winners Christian Fuchs and Shinji Okazaki helped Tuchel develop Mainz into a strong force domestically – they finished an astonishing fifth in 2010/11, but failed to qualify for Europe.

His stylish football and history of nurturing players strike many parallels with what Arsenal have enjoyed under Wenger. Tuchel has been strongly linked with PSG, but the Arsenal job may appeal as a more long-term project.

Nagelsmann is widely tipped as one of the great future managers, so Arsenal may look to pounce before he inevitably lands one of the big European jobs. It would be a long-term project under the Hoffenheim boss, however, rather than the faster success expected if they opted for Ancelotti or Allegri.

At 30, Nagelsmann is younger than senior players Laurent Koscielny and Petr Cech. We saw the problems this caused Andre Villas-Boas at Chelsea, however, and it may be a risk Arsenal cannot afford to take right now.

The German began his coaching career under Tuchel at Augsburg, moving to Hoffenheim in 2012 and becoming the surprise head coach in February 2016. His side were struggling at the wrong end of the table back then, but Nagelsmann steered them to seven wins from their last 14 matches – and ultimately, survival.

Last season, Nagelsmann’s excellent start to management continued as Hoffenheim finished fourth in the Bundesliga and qualified for the Champions League play-offs. They were beaten by Liverpool, however, then struggled in the Europa League to finish bottom of Group C. Suffice to say, however, fans are rather pleased with progress under their bright young boss.

Vieira was Arsenal’s captain the last time that the Gunners lifted the Premier League title: the Invincibles of 2003/04. After leaving Highbury in 2005, Vieira turned out for Juventus, Inter and Manchester City, retiring in 2011. The Frenchman became Football Development Executive at City and, two years later, took over the club’s development team.

As a former Arsenal legend and young coach, it's no surprise that Vieira is in the running. It seems unlikely, though: City Football Group would presumably be unamused at the prospect of letting him leave for a Premier League rival having sunk years into his development, but Arsenal probably need someone with more experience to oversee a new period of sweeping change anyway.

The Frenchman has mainly stuck to the Sky Sports sofa since hanging up his boots in 2014, but is serious about a future in coaching and was announced as an assistant manager to Roberto Martinez with the Belgian national side in August 2016. Since losing their first game together, Belgium have shown impressive form since, and will face England at the World Cup this summer.

With his UEFA Pro Licence secured, Henry may look to replicate the transition into management made by former team-mate Zinedine Zidane. But whether or not he would be ready to take charge at Arsenal, considering their fragile situation, is another matter. A job too big too soon, perhaps?

Quiz! Can you name the 26 top-scoring substitutes currently active in the Premier League?

The 40-year-old is currently in his second spell at Bournemouth, the club for whom he made 284 of his 286 senior appearances as a player.

Howe first took charge in 2008, aged 31, and salvaged the club’s Football League status. After a brief stint at Burnley between 2011 and 2012, he returned to his beloved Bournemouth and guided the Cherries to the top flight for the first time in their history. They finished 16th in their first season, five points clear of relegated Newcastle, and ninth last term – yet more year-on-year progress that Bournemouth have enjoyed ever since his arrival.

Howe has experience in the Premier League and a bright managerial career ahead. But Arsenal would be a huge step to take in almost every sense, and his inexperience managing high-profile stars at the highest level would doubtlessly count against him for the Emirates Stadium decision-makers.