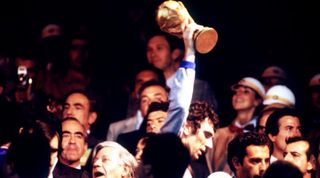 The Italian kept goal in four World Cups; a runner-up in 1970, he captained Italy to victory in 1982. In doing so, he became the oldest player to lift the sacred trophy.

The bombardiering Brazilian full-back enjoyed amazing longevity, with his international career spanning 15 years. During that timed he played in three finals and won two - against Italy in 1994 and Germany in 2002. No surprise he's won more World Cup matches (16) than any other player.

Der Kaiser won just the one World Cup as a player - in 1974 - but he'll feel it should've been more: he was a losing finalist in 1966 and came third in 1970, having played on in an epic semi-final despite breaking his collarbone. He just had to settle for winning it again as coach in 1990, which, let's face it, isn't bad work at all.

A lot is said of Moore's defending, but he rarely gets suitable praise for how good he was on the ball. He was so handy, in fact, that he chipped in with two assists during England's rarely-mentioned 4-2 win over West Germany in the 1966 final.

Not too many defenders have scored in the World Cup final, but Breitner managed it twice. The first came in the 2-1 victory over the Netherlands in 1974, the second in the 3-1 defeat to Italy in 1982.

Deformed at birth, shorter than average and so pigeon-toed he could wear his boots on the wrong feet, Manuel Francisco dos Santos was perhaps the game's best-ever dribbler. He led Brazil to glory in 1958 and 1962, top-scoring in Pele's absence on the latter occasion.

The winning captain in 1990 was the complete midfielder: a goalscoring box-to-boxer who later converted to sweeper. Easier to admire than to like, he was named by Diego Maradona as "the best rival I've ever had."

Zinedine Zidane was arguably the greatest player of the modern era, but he'll have mixed memories of the World Cup. He inspired France to victory in 1998, scoring twice in the final, before Les Bleus fell at the first hurdle in 2002. They reached the final again four years later, only for Zizou to be dismissed for a headbutt on Marco Materazzi - but his performances up to that point underline why he is included.

Hacked to bits at Spain 82, limping at Italia 90 and illegally boosted at USA 94, Maradona nevertheless deserves mention here for dragging Argentina to victory in 1986 with irrepressible brilliance, and the odd sleight-of-hand trick. Possibly the last player to win a World Cup largely by himself.

Whether you think the Brazilian or Maradona is the best player in the history of the game, there's no doubt he deserves a place in our World Cup XI. Pele won three of the four World Cups he featured in - a pretty darn good record, all things told.

One of the deadliest strikers in the history of the game, Der Bomber blasted in 14 World Cup goals in just 13 matches. If he'd matched Matthaus' 25 matches, he would've scored 27, but he retired from international duty before he turned 30.