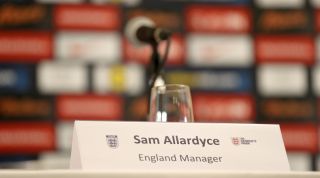 It ended before it even began. True, Sam Allardyce did get to pick an England team, and they did obey his first rule by keeping a clean sheet, and they even nicked a win with the archetypal Allardycian attitude of keeping going to the end.

But before he got to lead them out at Wembley, even before that win in Slovakia, the one that will forever make Allardyce a statistical oddity in the record books with his 100% win record, the manager had signed his own unwilling release clause with unguarded comments to disguised journalists in an attempted newspaper sting.

It was the sort of easily avoidable error Allardyce would deplore in his defenders, one he'd probably describe as "daft" in public and something far saltier behind a closed changing-room door. It's not even a new mistake: Sven-Goran Eriksson had flapped his mouth to a fake sheikh, five months before the 2006 World Cup finals; within a week of the story breaking, the Swede announced his intention to step down.

Allardyce fell far more quickly, partly because he hadn't built up enough protective kudos – Eriksson had reached two successive quarter-finals, a qualified success but one unmatched since The Beatles were a going concern – but also because of the nature of his wrongdoing. If there was a hint of the Hoddle in the unlovable mockery of Roy Hodgson, there was the sharper tang of corruption in some of the words Allardyce is said to have shared on bending the rules. The rules put in place by the FA. His employers, at least at the time.

This isn't even Allardyce's first brush with undercover reporters digging for dirt on financial impropriety. In the same year Eriksson fell upon the sheikh's sordid sword, a BBC Panorama episode accused the then Bolton manager of taking bungs – a claim he denied; an independent investigation by the former Met Police chief Lord Stevens found no evidence of irregular payments.

Given that the newspaper in question is attempting to ascertain how big a problem bungs are, it seems fair to assume this was the attempted subject matter for which the sting was arranged; it is notable that an otherwise voluble Allardyce quickly closed down any discussion on that particular topic. “Oh, oh, you’re not – do not,” he says. “I haven’t heard that. I haven’t heard that, you stupid man. What are you talking about? You idiot.”

It didn't matter. Elsewhere in the conversation, the England manager noted that it was "not a problem" that the FA rules on third-party ownership of players. He also seemed willing – FA permitting – to be paid to address potential investors. These two somewhat unrelated conversational topics were then welded together into an allegation which stuck.

For all the furore over the circumvention of third-party rules, it is the money which will have turned many opinions against Allardyce. No matter that many managers have image-rights deals in their contracts, that some can hardly be avoided advertising watches, sportswear, hotels, lager, tea, TV channels and video games; the idea of the England manager being paid by someone else seems to strike at the very heart of something ancient within the national game and its observers.

Don Revie, another uppity northerner disliked by many, was never forgiven for jumping ship to the United Arab Emirates; mind you, he did miss a friendly to take part in the negotiations, and then announced his departure by selling his story to a newspaper. Even genial Geordie Bobby Robson was excoriated for talking to PSV ahead of the Italia 90 finals which he already knew would be his international swansong.

Nor is it just northerners who are treated with disgust for seeking payment. Terry Venables, who is from Essex and therefore given the lazy wideboy/wheeler-dealer tag, was forced out over non-football business dealings. Eriksson – a foreigner! – was never trusted again after talking to Chelsea suits in 2003. It's as if the England manager should, like the Queen, be above petty concerns of cash.

The saddest thing is that for Allardyce, the money doesn't matter that much. He lives in a relatively modest house in Bolton, his home town for the majority of the last 50 years. He drinks at the local pub. His annual FA salary of £3m buys a lot of lager in Lancashire; if pushed, he would almost certainly have taken the England job for nothing.

Well, not nothing. Like many working-class lads who feel belittled, he doesn't want worldly goods so much as the tantalising intangible they may represent: respect. All that "Allardici" stuff was a good line for the hacks but it spoke of insecurity, of the perception of unfairness. The reason that Allardyce spent his brief moment in the national job bouncing about like Tigger on MDMA was that he felt elation and justification, the council estate boy being chauffeured up the gravel drive to the country club. It's notable than on the tape he refers to the paid role as being a "keynote speaker", a phrase he repeats, almost to himself, as if to assert his authority.

It's a job that would have suited him. He loves to talk, to hold court, to impress. I know this, having interviewed him over a dozen times: the line was never dead, the room was never silent. In dramatic terms it's properly tragic – the main character brought down by his weaknesses – that straying over the line from loquacious to garrulous has cost him his greatest love.

And so, by desperation and default, England end up with Gareth Southgate in charge, perhaps personifying the Peter Principle of management which states that a candidate will eventually be promoted to a station above their ideas. The caretaker is unlikely to be swept into permanent position on a wave of popular support, but who is? The second choice behind Allardyce appeared to be Steve Bruce. The bookie's favourite is Alan Pardew. Has it come to this?

While the FA wrestle with the choice of appointing either an Englishman or a top-class manager, there being no current intersection on that particular Venn diagram, they will also have to decide how deeply to investigate Allardyce's claims that their rules are easily evaded. An inquiry is threatened but they may find little evidence with which to further punish their former golden boy.

It's quite possible that having acted with unusual speed, they will realise at leisure that all Allardyce actually says on the tape is that it is "not a problem" for third-party players to be bought out completely and properly, as was the case in the transfer to which he referred, that of Enner Valencia to West Ham. It's very unlikely the current, shiny-shoed, trendy FA will come over all jilted-lover and act as their 1977 predecessors did by banning Revie for 10 years.

No, Allardyce will be re-employed well before Easter, by a Premier League side in a hurry to get out of trouble. This is the man who got Bolton into Europe, who easily reached safety with a Blackburn team that went down after he left, who got short shrift at a Newcastle side that went down after he left, whose defensive organisation is now sorely lacking in the West Ham and Sunderland squads sitting below the terrifying dotted line that means many more millions than any manager's salary.

He will be barracked by opposition fans but that never bothered him anyway. The gilded door to high society has slammed in Sam's face, and if his only option now is to rage as an outsider, it's what he will do for a while yet.

More features every day on FourFourTwo.com