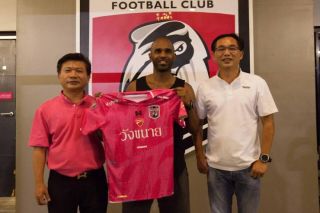 The Frenchman, who won a Champions League medal with Liverpool in 2005, has officially joined Premier League of Thailand (PLT) outfit Chainat FC.

Pongolle – who spent last season with Dundee United in Scotland – passed a medical on Monday and put pen to paper with a club that is currently 16th in the PLT table and right in the thick of a relegation battle.

The team known as the Hornbills will be the 13th club in Pongolle’s career, which has included stops with Atletico Madrid, Saint-Etienne and the Chicago Fire.

“I came here to play a pre-season match with Liverpool back in 2002 and we could feel the passion from the fans. It was impressive.” the 31-year-old said.

“I’ve been here for vacations as well. I just went to Samui Island a couple of years ago.”

Pongolle, who signed for Liverpool when he was just 16, is in excellent physical condition judging by his medical examination, despite previously having operations on both knees.

He is perhaps best known from his goal off the bench against Olympiacos that helped Liverpool reach the round of 16 during the 2005 Champions League campaign.

The Hornbills desperately need some attacking help, having garnered just 16 points and 20 goals from 20 matches to sit four points from safety in the 18-team competition.

During his press conference, the forward who was born in Reunion, a region of France situated in the Indian Ocean east of Madagascar, was asked the obligatory question about spicy food.

“I like spicy food because in my birthplace, we eat very spicy food there,” he said. “So It’s not a problem for me to live here.”