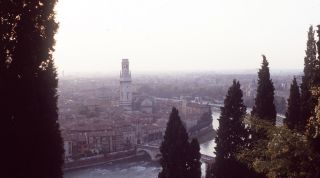 There are two Serie A clubs in Verona – Hellas and Chievo – but on a humid Sunday afternoon, a gaggle of 100 people dressed in red and blue have congregated in a city square, many holding flags and banners.

Some banners depict Che Guevara; one reads ‘kilometres divide us, anti-fascism unites us’; another says ‘call us Virtus-ese, not Veronese’; others have ‘Wrexham FC’ and ‘St Pauli’ written on them in marker pen. These are the fans of Verona’s third club, Virtus Verona.

Virtus are as much a political movement as a football club – the team was founded in 1921 and have since have become bastion of resistance to Hellas Verona. In the quaint setting of Verona, racial tensions seem out of place, but the city has seen huge problems with fascist sentiment. Hellas fans became infamous in the 1990s for displaying swastikas at games, once even hanging a mannequin of a black man at a game as a statement that they would never accept a black player.

Things have improved moderately; Hellas have fielded black players, but their fans still have a fearsome reputation. Many football lovers in the city have opted to support Chievo instead. As recently as the 1990s, Chievo were a village team playing other amateur sides before a series of promotions saw them catapulted into the bright lights of Serie A.

Virtus’s primary goal is to repair the damage that Hellas have done to the city’s reputation. Initially they were little more than the equivalent of a Sunday League team from the suburb of Borgo Venezia, but as the team has grown in support, they have followed in the footsteps of Chievo and joined the Lega Pro Seconda Divisione – Italy’s fourth tier, and the level at which clubs become professional – at least in part last season. Virtus battled hard but were relegated back to Serie D as a league restructure sent six down automatically, but their fans remain unfazed.

“Supporting Virtus means supporting a club which is more than a team – it’s a different world in the city, not just football but also fair play, social values and true virtues,” one supporter tells FFT.

“The fans of the big team in the city are sadly famous for being the most racist in Italy and Europe, but our supporters' group is anti-racism, anti-fascism, anti-sexism and anti-homophobia. Through these values, we hope to restore the image of Verona.”

The club is part of an anti-fascist movement in Verona, which also includes anti-fascist bands and artists. The movement is gathering momentum, and the club has links with fans from teams across Europe, hence the Wrexham and St Pauli banners. But marking yourself out as anti-fascist in Verona remains a brave thing to do in a city where there is a considerable groundswell of support for right-wing views.

Virtus’s heart and soul is Luigi Fresco, who is the rarest of things – a chairman-manager. For 33 years, Fresco has been in charge on and off the pitch. In a country where coaches rarely last a full season, he is a sign of how different Virtus are from other clubs.

“I don’t think there are any other chairman-managers in Italy,” Fresco admits. “I’m often compared to Sir Alex Ferguson but now I’ve beaten his record because I’ve been in charge of Virtus for 33 consecutive seasons.

“We like to think of ourselves more like a family than a football club, but the results do matter. The dream was to get to the professional ranks and I’m very proud with how far we have come.”

Fresco admits that the workload is intense, but he can at least rest assured that he won’t have to answer to his chairman if results slide.

While the club is on the up, Virtus have met resistance from the local authorities that many feel is linked to their political leanings. The club’s small Stadio Gavagnin isn’t up to Lega Pro standards, so last season the council forced them to use Hellas Verona’s Stadio Bentegodi. The fans responded by staying outside the stadium and supporting their team from there.

“Over the last eight years we have always been present but we don’t want anything to do with Hellas and won’t share their stadium,” a Virtus fan explains. “We will only enter the Bentegodi when Virtus play there away from home.”

In a country where results are king, Virtus provide a rare contrast – a club where principle genuinely stands above pragmatism.