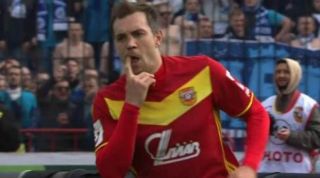 The Russia international was loaned out to Arsenal Tula in January for the remainder of the season after falling out of favour with former Inter Milan and Manchester City manager Mancini.

So, ahead of Arsenal's Russian Premier League clash against Zenit on Sunday, a determined Dzyuba reportedly agreed to pay half of the €150,000 fee necessary to play against Mancini's side.

It paid off: in the 88th minute, he tapped in a dramatic late equaliser for Arsenal which meant the game finished 3-3. After scoring, Dzyuba rushed over to the touchline and celebrated directly in front of the Italian.

After Dzyuba's successful moment of vengeance, Mancini insisted he didn't rue loaning out the 29-year-old targetman.

"I don't regret that I broke up with Dzyuba for a while. I don't feel anything like this," he told NTV.

"I'm happy for him, I'm pleased with the way he's been playing for Arsenal."

Speaking on Monday, Arsenal's general director Dmitry Balashov says the club have two weeks to pay Zenit for starting Dzyuba and have offered to cover the full costs themselves.

"Who will pay, it does not matter," he told reporters in quotes cited by sports.ru.

"This is not so important a question. We have two weeks, at this time we will pay for everything."

Asked if it was worth it, Balashov replied: "Of course. Even if the amount was more, we would pay more."