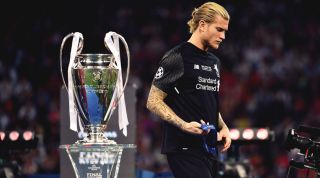 Loris Karius’s loan spell at Besiktas came to an end on Monday. Karius announced on social media that his time in Turkey was at an end, that he’d enjoyed his time at the club, but that he was heading back to Liverpool.

At which point, of course, the internet started laughing along to the footage of his many, many mistakes, and – effectively – at the long decline of his career.

The errors are difficult to watch. Most supporters accept that goalkeeping mishaps are just a tax on playing the position, but Karius’s mistakes are of a particular grade. They’re bizarre and comedic and every time a new one appears online, it’s always slightly worse than what came before.

He’s a player lost within the dark night of his form. Given how traumatising Karius’s experience during the 2018 Champions League final likely was, he’ll likely remain its prisoner forever.

The perception of a before and after with him is reductive. It’s too neat. Prior to his performance against Real Madrid, there were signs of Karius’s fragility – not so much harbingers of doom, but certainly suggestions that there were flaws within his technique and that trouble lay ahead.

What has followed has been grimly fascinating. It also been an example of one of the great unexplored territories of the sport. The nature of goalkeeping form and its many idiosyncrasies remain impermeable to analysis in ways in which the other departments of the game don’t - and even now, in this intellectual age, the position and the forces which determined performance exist in the shadows.

An interesting angle of approach is to consider how many goalkeepers have truly recovered from high profile mistakes. Or, in a more ordinary way, how many have emerged from periods of sustained, but only generically poor form to reclaim their reputations.

The answer, of course, is not many. Some of the greats have had terrible spells. Peter Schmeichel did, so did Oliver Kahn, David De Gea is having one at the moment. But for others, it often seems a one-way street. Before a mistake or a new trend of form they belong in one category, afterwards they’re entombed within another.

Joe Hart is a very good example of that. It isn’t so long ago that he was arguably one of the most respected goalkeepers in Europe. Between the mistakes he made at Euro 2016, though, and then the saga and consequences of Pep Guardiola’s arrival at Manchester City, he was ultimately recast as a punchline.

He has been to Torino, to West Ham, and now to Burnley, without so much as even flirting with his old reputation. Hart’s identity has changed forever.

Rob Green’s case was clearer. A future England No.1 before Rustenburg, he became a liability emeritus after he had shovelled Clint Dempsey’s shot over his own line. Like Scott Carson three years before. Or Peter Enckelman, after what happened to him at St Andrews.

It’s like an island that there’s no coming back from. It doesn’t matter how a goalkeeper arrives – through major or minor misfortune – they’re marooned for eternity, deep in sport’s Bermuda Triangle.

It’s goalkeeping at its most cruel, but also its most interesting. What’s the reality? Is it that the players in question are deeply, psychologically wounded by what they’ve suffered, or is it just the perception of them that changes?

Or is it even more complicated than that: does a goalkeeper’s reputation depend on a delicate balance of anecdotal evidence? After one too many dropped crosses or mishandled shots, does the apprehension among supporters watching become so tangible that the player becomes aware of that anxiety, and a fear of making mistakes is then some kind of collaborative, self-fulfilling prophecy.

Consider Paul Robinson, for instance. Where the apex of his Tottenham career actually occurred, who knows, but his descent away from it (and ultimately out of the club) wasn’t instructed by anything specific. Gary Neville’s own goal in Croatia was comedic, but more a freak than anything else.

It wasn’t a waypoint. Rather, there was a day when Robinson was reliable. Then, without warning and for no particular reason, a time when he wasn’t. His errors were no longer unusual and the White Hart Lane crowd developed the habit of wincing whenever he left his line. It was a binary change that occurred without anyone noticing.

What’s being described sounds like a truth across the game. All performance is subject to form: always. Forwards go through long periods without scoring. Midfielders lose their touch. Defenders miss tackles and misplace passes.

But it seems different for goalkeepers; the process of disentangling themselves appears that much more difficult.

What, for instance, is the path available to someone like Loris Karius? His failure to resurrect his career in Turkey presumably isn’t due to faltering effort or a lack of determination. Several weeks after the mistakes which he’s known for, he released a video on his social channels, showing himself running up a hill with a steely expression on his face.

It was a real-life redemption montage; he was going to overpower the adversity, sweat out all the shame and banish the negativity from his pores. Logically, that should have been enough. But with goalkeepers it’s almost as if the opposite is true – that the harder they struggle and the tougher they are on themselves, the worse their situation invariably becomes.

For which other positions on the pitch would that be true? Yes, a Schmeichel or a Kahn can force his way back to form almost through force of will, but the average goalkeeper is really more like a boxer. Once he’s taken a bad punch and lost his first fight, nothing is ever really the same again. For him, or in the eyes of anyone watching. From that point, everyone is just waiting for another calamity.

What is the path back, then? Or, if this ailment is really some kind of minor psychosis – a tendency to focus on what could go wrong, or the fatal undermining of vital confidences – then how can the mind be reset. Not by good saves or good games, because every player mentioned here has had the benefit of both. Instead, it seems to require a sustained period of almost impossible perfection, the benefits of which can be voided at any moment, by the slightest slip.

It’s fascinating. Horrifying, too, and in many cases very cruel. But, beyond vague mutterings about how "mental" the position is and a need for "toughness", there’s scant explanation for why so many goalkeeping lives have these separate acts.

CORONAVIRUS No more smoke and mirrors: Premier League must be transparent about return plans