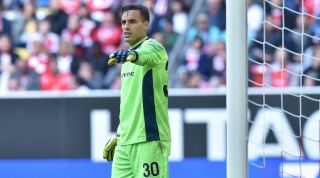 Fortuna Dusseldorf's goalkeeper helped his 2. Bundesliga side to a crucial 2-0 victory over Arminia Bielefeld on Saturday – but not without some pain.

Arminia won an indirect free-kick inside the penalty box, meaning Fortuna had to line all their players up on the goal-line.

Yet Wolf was the one who blocked the shot to keep a clean sheet for the leaders of Germany's second tier. The trouble for him, however, was that he achieved it with a delicate part of his body.

"You always say with your balls but this one I saved with my penis," the 29-year-old told Bild.

"I never experienced such a free-kick. First the pain was hellish but after some ice and rest it was OK.

"I have worn protection as a youth at Hallenspielen. But you can't run properly - it's crap!"

You can't knock his commitment to Fortuna's cause.