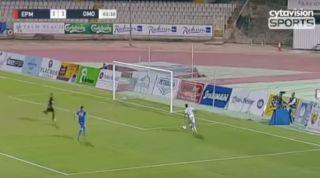 Omonia lost 2-1 to minnows Ermis Aradippou on Sunday in a game they really should have won – and it was their top goalscorer Derbyshire who had the opportunity to turn the game on its head with half an hour remaining.

With the scores at 1-1 in the 61st minute, the former England U21 international burst through on goal and hurdled the Ermis goalkeeper to face the simple task of slotting home into an empty net.

But Derbyshire infuriated the home support by dallying on the ball for too long and somehow ended up heading the ball away from goal in a crumpled heap.