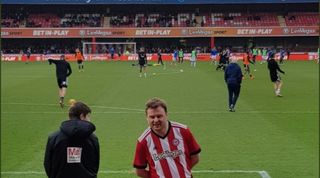 The VIP treatment included the chance for the 40-year-old Nick Goff to be an on-pitch mascot ahead of Brentford's Championship clash against Bolton.

His mates ensured he seized the opportunity, making Goff parade around the pitch with his younger pals – much to the bemusement of the Bees' first-team stars.

Hahahaha gets better I’ve just been told he’s a wolves fan too January 14, 2018

And if that wasn't bad enough, it turns out Goff is actually a Wolves fan.

We'd say it was a day to rememberfor Goff – but guessing events after the game, we'll assume not. Shame.

Watch: Estoril led Porto through brilliant free-kick – but match was abandoned thanks to crumbling stand