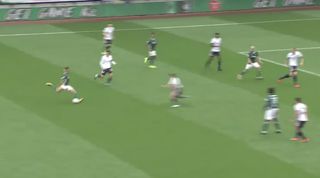 Brentford beat Bolton 3-0 at the Macron Stadium on Saturday, which hauled the Bees out of the relegation zone.

The former Arsenal midfielder, whose first of four appearances for the Gunners came against Bolton in a 2011 League Cup clash, found space from outside the box to leather a venomous strike into the top corner. The replay shows the satisfying level of swerve on the ball.

Defeat for Bolton means they stay rooted to the bottom of the Championship table on two points.