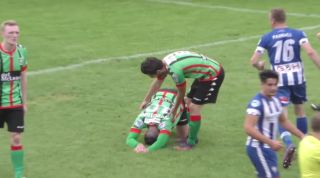 With the score 0-0 heading into stoppage time at The Oval on Saturday, Glentoran were awarded a penalty following some sloppy defending by visiting Coleraine.

Attacking midfielder McGuigan manfully stepped up to take the spot-kick – but slipped during his run-up and hacked a shot off the bar.

Coleraine players and fans celebrated like they'd just scored, as the result lifted them back to the top of the league. Glentoran remain fifth in the 12-team league, seven points off the leaders after eight games.