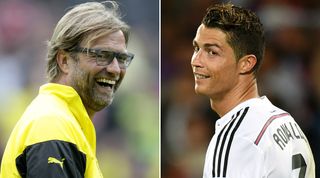 Real Madrid and Barcelona have spent their summers scrapping like angry parents at a Next sale as they jostle to start the season with the most extravagant frontline – and like the kind mediators we are, FFT thinks they’ve both done a smashing job.

Real’s signings of Toni Kroos and Hamez ‘James’ Rodriguez add to an already-terrifying cast of Cristiano Ronaldo, Gareth Bale and Karim Benzema, who, if you believe the Super Cup Final line-up, apparently all fit into the same team. It’s like an expensive birthday and Christmas rolled into one for Flo Perez.

Those pesky Catalans up north have splashed €81m on Luis Suarez, though, to complement an attacking arsenal already including bruised World Cup stars Leo Messi, Neymar and Pedro. Both giants have signed goalkeepers, but who cares about defending anyway?

Over in Germany, Bayern Munich have stolen another player off title hopefuls Borussia Dortmund in Robert Lewandowski, and let Mario Mandzukic skulk off to Atletico Madrid (who also bagged twinkle-toed Frenchman Antoine Griezmann). Dortmund snapped up Ciro Immobile to compensate, and have tied down Real cast-off Nuri Sahin permanently.

VERDICT: An easy win for the La Liga boys; anyone not excited about the ludicrous potential for net-bulging from the Big Two this season is probably not a human being. The Buli’s new arrivals further down the table, however – see Josip Drmic, Hakan Calhanoglu (both Bayer Leverkusen) and Sidney Sam (Schalke) – are intriguing. 0-1.

Enjoy goals? Of course you do. Well, look no further than the Bundesliga, which troubled scorekeepers more often than any of Europe’s major leagues last season with 3.16 goals per game. The Premier League (2.77), La Liga (2.75) and Serie A (2.72) were closely matched, while Ligue 1 trailed like a crippled hound (2.45).

With an insatiable desire to play bumbling goalkeepers (here’s looking at you, Rene Adler) and sign below-par centre-backs (Johan Djourou? Get him in. Johnny Heitinga? Yes!), German clubs know what the fans really want. No team’s matches averaged fewer than 2.5 goals last season (unlike seven La Liga outfits), with chieftains Hoffenheim producing over four per game thanks to their wonderful distaste for organisation.

VERDICT: The numbers have spoken – you won’t have chance to nap through a Bundesliga game. 1-1.

Pep G and his turtleneck charm; Jurgen Klopp’s bespectacled ‘bantz’; Freiburg’s Christian Streich cycling to the stadium; there’s enough characters in the Bundesliga to keep you occupied – if they keep their jobs. Seven teams start the new campaign with a different boss to the last, while Stuttgart, Hamburg and Nuremberg all sacked two managers during the course of last term.

VERDICT: It’s still all about Klopp and Pep, who make for far more interesting viewing than nice-but-dim Ancelotti and Enrique. Only the former would hit a fourth official with a ball, and threaten to “eat a broomstick” if one of his players jumped ship. 2-1.

Chances of someone getting arrested

Bayern’s long-serving head honcho Uli Hoeness has begun his three-and-a-half year prison sentence for dodging €28.5m in taxes – but he’s got nothing on former Sevilla president Jose Maria del Nido, who was slapped with a seven-year sentence last season for his role in the embezzlement of public funds.

Elsewhere there’s Luis Suarez and his, er, ‘problem’ – but the Uruguayan is getting help for it, don’t you know. “I am speaking to professionals. The right professionals,” parped the former Liverpool hitman. Sergio Ramos is in danger of jail time if he picks up any more red cards, while any one of the 22 men playing in El Clasico have the ability to create a mass brawl where at least six players get gouged/kicked/over-zealously tickled/pinched/murdered (delete as applicable).

VERDICT: With more scope for niggly hatchet jobs and shameless petulance in La Liga, don’t be surprised to see Pepe in a police car before now and May. 2-2.

At the top of Spain it’s a genuine three-horse race – unless you ask the bookies, anyway. Last year’s winners Atletico broke the mould by becoming the first team in 10 years to poop the Big Two party, but they’re available at a massive 16/1 to do it again.

Bayern won the Bundesliga by a whopping 19 points last season, but despite Lewandowski’s arrival it won’t be so easy this time around. The title isn’t quite a foregone conclusion (although it’s close), but elsewhere the division is captivating; see Hamburg’s third-date flirtation with the drop last season, Augsburg’s plucky rise to the top half and Hoffenheim’s goaly exploits.

VERDICT: Below the usual suspects in La Liga, there’s little to get excited about. Tiny teams make up the numbers (like Eibar this season, playing in La Liga’s smallest-ever stadium at 5,250) in a league where sneaking a point off the big boys can define a season’s work. 3-2.

If you’re planning to embark on a European away day this season, there really is only one country to visit. Germany – home of mass-organised fandom, fine beers and more sausage than you can shake your stomach at – is king.

In the Bundesliga last season, only Hertha Berlin really struggled to fill their 76,000 Olympiastadion (yet still averaged 50,000), while relegated Nuremberg (40,400) and play-off drop dodgers Hamburg (51,800) continued to pull in the crowds. In Spain, though, just eight clubs managed to top 30,000 every week – and anyone who’s been to the Nou Camp or Bernabeu will attest that thousands are only there on their hollibobs.