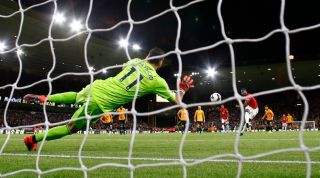 Last night's miss at Molineux has raised doubts over Pogba's place as one of Manchester United's designated spot-kick takers. But all too often, we concentrate on the misser rather than the missee.

Or, to use English, the goalkeeper. The big weirdos who like to be different. We simply don't celebrate them enough – so that's why we've put together this quiz.

Last night's save was Rui Patricio's first in the Premier League, so he doesn't make our list of all-time spot-kick stops just yet.

Two keepers are level there with nine penalty saves, so a congratulatory pint to the goalie who eventually makes it to double figures (although he’ll probably just palm it over the bar out of habit).

For now, we’ve listed every keeper who’s made it into treble territory (source: premierleague.com) by saving at least three spot-kicks.

Six minutes are on the clock, and we’ve listed every club where they've played (or play) Premier League matches as a bonus clue. Do let us know how you got on @FourFourTwo – and challenge some chums too while you’re at it...

QUIZ Can you name all 34 Nordic players to have scored 10+ Premier League goals?