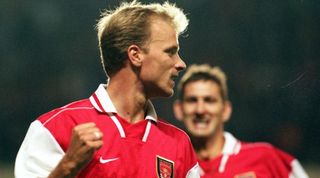 Ignoring for now the Football Didn’t Start With Sky M8 award, it’s interesting to note how often the winners don’t overlap. Of the first 24 PFA winners, only six also won the writers’ approval.

With trophy season approaching, we thought we’d salute those rare chaps who managed to win both PFA and FWA awards. Starting with one you might not have guessed…

Forced to predict which 1970s footballer would please players and pundits alike, you’d go a long way before naming Terry Mac. But upon reflection it makes perfect sense: team-mates, opponents and writers all appreciated the non-stop, skilful midfielder who was unlucky to only gather 25 England caps.

Bob Paisley’s side retained the League and League Cup on what turned out to be the avuncular gaffer’s farewell lap. Despite turning 32 in the March, King Kenny scored 20 for the fifth time in six Anfield seasons – but it was his on-field development of Ian Rush (31 goals) that impressed both awards electorates.

Don’t worry, Anfieldphobes: it’s not all Red. By 1984, voters couldn’t ignore the rangy striker who always looked like he needed a good meal but never failed to feast on chances. Having twice reached 30 goals, he hit 47 as Joe Fagan’s Liverpool added the European Cup to now-traditional League and League Cup.

The Goodison loyalists didn’t like Lineker to start with: he’d replaced their hero Andy Gray, sold to make way and money. The champions struggled to adapt but a hat-trick against Birmingham set him en route to 40 goals in all competitions, despite a curious home shirt that resembled a baby’s bib.

In the ‘80s, every season seemed to create a new 40-goal striker. Midway through his tour of seven London clubs, Allen spearheaded David Pleat’s revolutionary 4-5-1 formation in front of a forward-thinking midfield frequently harnessing Hoddle, Waddle and Ardiles. Allen bagged an opening-day hat-trick at Villa and eventually piled up 49 in all competitions.

The last double award-winner for a decade was part of a fearsome redesigned Liverpool. With Rush off to Italy and Dalglish concentrating on managing, newcomers Peter Beardsley and John Aldridge impressed – but the key man was Barnes, gliding with equal panache and disdain past floundering full-backs and racist opposing fans.

The avatar of an academic Arsenal advancing from the old school. The Dutchman (mis)named after Denis Law top-scored for the Double-winners and, more importantly, led a new cerebral culture under Arsene Wenger. The Premier League Player of the Season panel preferred little Michael Owen, though.

The Treble-winners weren’t allowed to defend their FA Cup, instead packed off to the Club World Cup to win the FA some FIFA brownie points. But in the league they were utterly formidable, racking up 97 points to win the title by 18. Their beating, snarling heart was Roy Keane.

NEXT PAGE: Va va voom, CR7 and the player who ran 1.5 million miles in a season! Possibly...

In his fourth Arsenal season, a second successive 32-goal haul helped Titi pass 100 goals for the club. One of them, a half-of-Highbury slalom through successive toppling Tottenham players in November 2002, still plays in Gooners’ private clipreels every night before bed. It was voted goal of the season on ITV’s awful The Premiership.

His season spearheading Les Invincibiles included a personal-best 39-goal collection. It might have been different had Arsenal accepted the bid from new kid Roman Abramovich, but by Easter Wenger was calling Titi “the best striker in the world”. He became the first man to retain the FWA award, the first to retain the PFA gong – and the first to do the treble by adding the Premier League seasonal award.

Love or loathe him, you can’t deny he put the work in after arriving a skinny stepover addict with pimples and bad highlights. By his fourth Old Trafford season he was dovetailing with his Gelsenkirchen victim Wayne Rooney, each bagging 23 as they regained the Premier League; like Henry in 2004, Ronaldo won all three player gongs.

Much to Fergie’s annoyance, Real Madrid were circling but CR7 stayed put to grab 42 goals in 49 games as United retained the Premier League and regained the Champions League for the last time to date. The magical Madeiran won all three player awards – an unparalleled double-treble – plus the Ballon d’Or, FIFA World Player, FIFPro World Player, UEFA Club Footballer, Onze d’Or and European Golden Shoe. Otherwise, he was rubbish.

By 2012, Van Persie was keeping Arsenal in the top four almost single-handedly. His 37 goals this season – 30 in the league, against 17 different opponents – took him past 100 for Arsenal, won him a Golden Boot and earned him a lucrative late move to a club that might win something.

Remember the Bale Curse? Spurs didn’t win on any of his first 24 Premier League appearances. But by 2012 he had gone from a jug-eared jinx of a left-back to an unplayable winger coveted by the vultures at Real Madrid. His 26 goals this season included strikes against Manchester United, Liverpool, West Ham, Arsenal (twice) and Inter. The Bernabeu beckoned.

Suarez wasn’t even the biggest Liverpool signing on 31 January 2011, but he did rather better than Andy Carroll. Fluidly fronting Brendan Rodgers’ attack-minded outfit as the Reds pursued their closest title challenge in a generation, he scored an eye-watering 31 in 33 games before departing for Barcelona via a chomp at Giorgio Chiellini in Brazil.

Chelsea shrugged off the departures of Frank Lampard and Ashley Cole to win only their second title in nine years, thanks to Jose Mourinho’s second-season success, built around the bastardry of Diego Costa, solidity of Nemanja Matic and – most of all – the exquisite artistry of Hazard: 14 goals, nine assists, 58 passes per match.

Leicester’s 2016 title fairytale split the juries: the PFA picked Riyad Mahrez, the FWA Jamie Vardy. In truth, neither would have won the title without the indefatigable Kante, who helped new club Chelsea back to the title with more of the same at Stamford Bridge. Over the two seasons, Kante contributed 601 recoveries, 302 tackles, 238 interceptions and 1,500,000 miles run [Have we checked this last one? – Ed.].

And so to Mo, who won all three personal titles last season but would presumably willingly swap them for the Premier League this term. Whatever happens, nobody can take away his magical season of 32 goals in 36 games, with 10 assists and a World Cup campaign to boot.