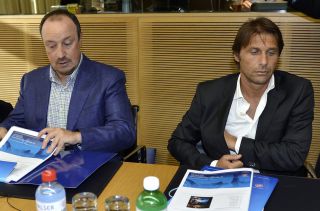 Antonio Conte had been musing what Napoli would be like when they hit full form, in light of Rafa Benitez claiming his side were only at 75 percent of their potential in the opening months of the season.

The Juventus coach gave the Spaniard a glimpse of what it is like to face the champions when they are in full stride, and it must have left him hoping he can find that extra 25 percent as soon as possible or Napoli’s hopes of wrestling the title away from Turin will be over.

It was a majestic show of strength that swept the visitors aside; Fernando Llorente opening the scoring in the first two minutes, Andrea Pirlo adding a trademark free-kick of old in the final quarter and Paul Pogba firing home a stunning volley to add to his ever-growing showreel of extraordinary finishes.

If Napoli were to end a dismal record at Juventus, where they had failed to score in five of their last seven visits and last kept a clean sheet back in 1982, they needed to come flying out of the blocks and take the game to the home side.

Instead, they gave possession away straight from the kick-off, and were immediately on the back foot and a goal behind in two minutes when Llorente scored from close range. Replays showed the Spanish striker was offside, 23cms in fact according to the post-game round-up shows.

Conte’s verbal sparring with Benitez in the build-up had not prepared the former Liverpool coach for the onslaught when the gloves were off, and it was a pretty pitiful performance in the first half where only two close-range saves from Pepe Reina ensured Napoli were still in the contest at the break.

Benitez had set out his side not to attack – or defend for that matter – in great depth. Gokhan Inler and Valon Berhami were positioned in front of a static back four, but neither did much to stop Arturo Vidal or Pogba getting beyond them and into dangerous positions to support Llorente and the ever-darting Carlos Tevez.

Of course, pulling the opposition all over the place was pass master supreme Pirlo, and the decision not to drop Marek Hamsik back to mark the playmaker was Napoli’s undoing from the first whistle.

Hamsik was a marginal figure at the best of times, and with the wide players Josè Callejon and Lorenzo Insigne waiting for passes rather than getting involved, the Napoli midfield was totally overrun.

The rare occasions when play reached Gonzalo Higuian, the lone striker was easily marshalled by a Juve back three that had plenty of time to step out from their deep positions to make timely interceptions.

Conte had been forced, by Giorgio Chiellini’s injury and Martin Caraces' World Cup duty with Uruguay, to bring in Mauricio Isla as a wing-back on the right, balanced by Kwadwo Asamoah on the left. The former Udinese men got beyond Callejon and Insigne to leave Napoli full-backs Cristian Maggio and Pablo Armero isolated, especially with Pogba and Vidal taking up space inside to play quick one-twos.

With Llorente and Tevez linking up in front of the penalty area it was one-way traffic, but at least Napoli held on to the interval even if they looked completely dazed and confused. Benitez instructed Hamsik to drop deeper, starting moves by bringing the wide men into the game, and the visitors had a more solid platform at the beginning of the second half.

They played the ball around to better effect, yet there was never any feeling they had that killer instinct in the final third and their much vaunted long-range shooting, having scored eight goals from outside the area, was absent apart from an Insigne free-kick which Gigi Buffon turned around a post.

A physically, not to mention mentally, tiring Champions League encounter with Real Madrid in midweek looked to be beginning to take its toll on Juventus midway through the second period, but all they were doing was steeling themselves for the final 20 minutes when they broke quickly from deep.

It was Tevez, who had held off opponents all evening through sheer upper-body strength, who forced a free-kick some 25 metres out and up stepped Pirlo to bring the house down.

He has changed his style at set-pieces over the last few seasons, going for curling efforts instead of hitting directly through the ball with the top of his foot. But on the big stage he must have decided to return to what had served him best, and the result was a unerring finish clocked at 95km/h which left the flying Reina following the trajectory of the ball as it dipped into the net.

The former Liverpool goalkeeper was then left on his knees as Pogba nonchalantly swept home a 30-yarder in off the post – although that thunderbolt came in at 109km/h as it hit the upright.

Home defender Angelo Ogbonna was sent off for a second yellow card soon after, but there never seemed any danger of Juventus handing a totally demoralised Napoli a consolation goal.

Benitez has now seen his side beaten by Roma and Juventus, and in both games they lacked the intensity of genuine title contenders. At least this humbling at the Juventus Stadium should serve to toughen the Partenopei up for their vital Champions League ties against Borussia Dortmund and Arsenal, not to mention what lies ahead on the domestic front.

With leaders Roma held at home to Sassuolo, Juventus are stalking the top spot lying just a point off the Romans. With what can only be described as a favourable run to the winter break, Conte and Juve could be in the driving seat long before Benitez finds that extra gear from his side.