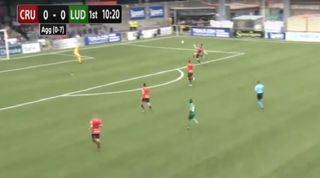 NIFL Premiership champions Crusaders didn't have the best of times against Bulgarian outfit Ludogorets in the first round of Champions League qualifying.

After losing the first leg 7-0 in Razgrad, it's fair to say the Northern Irish side were playing for pride in front of their home fans at Seaview on Tuesday night.

But the hosts got off to a woeful start when defender Rodney Brown lobbed the ball over goalkeeper Sean O'Neill from outside the box just 11 minutes in.

Probably not the career moment Brown will be showing the grandkids.

Jakub Swierczok added another goal in the second half to complete the 9-0 rout. Yet, despite the heavy defeat, Crusaders boss Stephen Baxter praised the efforts of his team against their lofty opposition.

"I'm very proud of the players," he told the Belfast Telegraph.

"I was hurt after the 7-0 defeat and wanted a response. The players were magnificent. Given their quality, it almost felt like a moral victory."

Who's in charge? Nigeria's top league has been suspended indefinitely