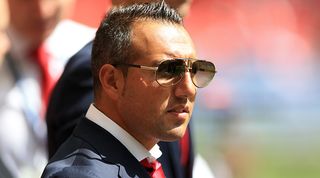 Former Arsenal midfielder Cazorla has been put through the wringer.

After 636 days on the sidelines, the 33-year-old has endured 10 operations and, in October 2017, was told he should be satisfied if he could walk with his son in the garden.

However, that hasn't stopped him from undergoing a pain-filled journey back to the football pitch.

Following his release from Arsenal in June, the graceful technician has been trialling with former club Villarreal as he looks to secure a return to regular competitive action.

Cazorla was given a standing ovation when his number came up on the fourth official's board, before playing 23 minutes of his team's 1-1 friendly draw with the Segunda Division B outfit at Villarreal B's Mini Estadi ground. Lovely stuff.

Who's in charge? Nigeria's top league has been suspended indefinitely