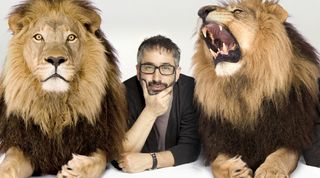 You said in one of the early podcasts that you hate being asked this question, but here goes; how will England do in the World Cup?
After we beat Croatia at Wembley in the qualifiers, I started to convince myself that it might be worth thinking we had a chance. But then we started to implode, which is what happens with football in this country when we want something too much. We desperately want to win the World Cup but we’ve been denied it for so long and as a result bad things start to happen, which at the moment seems to be a lot of injuries.

It’s a bit of a problem when Rio Ferdinand gets injured and his replacement is a bloke with a hole in his knee who can’t play two games in a week [Ledley King]. It almost seems to me like we were so worried about the possibility of Wayne Rooney getting injured that we had overlooked what might happen if somebody else got injured.

It’s been quite a rocky few months for England, with some of the things that have gone on, but I don’t think any of that should really make much of a difference once they actually get out there and play. We only have to win four games - so it’s possible, but only possible, rather than probable.

Well at least other teams have lost players to injury too...
Yes, they have. To be honest I’m worried it's an anti-Chelsea conspiracy - Joe Cole and Ashley Cole have only just come back from long term injuries, then you’ve got [Didier] Drogba, [Michael] Ballack, [Michael] Essien, [Jon Obi] Mikel and then [Arjen] Robben - a former Chelsea player - all getting injured. I suspect somebody, probably associated with Arsenal, is somehow nobbling Chelsea players due to some form of long-held grudge.

Arsene Wenger's got the voodoo dolls out again?
It seems like that could well be the case.

What do you make of Fabio Capello?
I still don’t know much about him and I think that’s probably a good thing. One thing I will say is that, although people always go on about him winning a trophy with every team he’s managed, if you look at where he’s been and the players he’s worked with, it’s no surprise. To use a football expression; 'at the end of the day', I don’t think the manager is anywhere near as important as the players.

Case in point is Argentina. Clearly, Maradona is a terrible manager – he’s picked a player, Ariel Garce of Colon, because he had a dream about him, and god knows what Maradona’s dreams are like. But he’s still got this most incredible selection of players, and they could win in despite the fact they have this mad man as manager.

From England’s point of view, I think we have a very good manager but not the best set of players, and I’d rather have the players.

Where do you stand on the Emile Heskey debate?
I don’t like to slag off Heskey because I find there’s something very sweet about him. He looks a bit put upon and I sometimes feel a bit sorry for him. There’s this theory that he’s well worth his place in the team, despite not scoring, because he brings the best out of the players around him and is great and holding up the ball. But I'd say a striker should be able to score goals, you know. And he’s only scored seven in over 50 appearances for England.

What are your abiding memories of supporting England – good and bad?
One of the clearest memories in my life is watching England v Belgium at Italia 90 in my brother’s flat in Hornsey. As I’m sure most people will remember, Gazza took a free kick and David Platt got onto the end of it to score this brilliant volley in the last minute of extra-time to put England through to the quarter finals.

It was like I blacked out and came round about three minutes later, I don’t think I’ve been as caught up in a moment as I was when that goal went in. That’s still one of my high points while watching England. That and Joe Cole’s goal against Sweden in 2006, and Beckham’s last minute goal against Greece in the qualifier 2001, which I was fortunate enough to see in the flesh.

As far as low points go - obviously, there’s all the penalty shoot-outs. I was there when England lost to Portugal in 2006 and I would actually say that, in a funny way, the low point was the one that we scored. Owen Hargreaves was the only England player that managed to score and at that point he was still effectively German.

England's flight to South Africa was a long one; which member of the squad would you least like to be sat next to for 11-and-a-half hours?
Good question. Ashley Cole, who I assume just cries all the time now. Eleven and a half hours of crying his heart out thinking of Cheryl and the fact the whole country now thinks he’s a terrible person. When he’s not crying, he’ll be discussing ways in which he can rebuild his public image. That would be very bad.

Do you not think you could be the man to help him do that?
We'd only have 11 and a half hours, plus I’m going to be watching a film anyway, aren't I? Another one I'd worry about would be David Beckham – nobody has really explained what it is he’s doing there and I’d be worried he’d be a bit insecure and constantly trying to justify his presence to anybody who’ll listen. Although he’d probably be sat with Victoria anyway – assuming she doesn’t fall under Fabio Capello’s WAG ban. The only other concern would be Ledley King – the air pressure might be too much for his knee and it could explode…

That could get messy. Speaking of which, if you were stranded in the middle of the South African veldt with no transport, food or means of communication, which England player would you want by your side?
Wayne Rooney - he's most like an animal. He’s just generally like a combination of gorilla and lion - in good way - and I think having someone with the capabilities of a gorilla and a lion would be very useful in such a situation. I reckon that Wayne could have both a lion and a gorilla in a fight, if it came to it.

Simultaneously or separately?
Let’s not exaggerate - separately. I’m hoping they won’t gang up, and just attack us one-on-one.

If not you may need to get your hands dirty…
Well, I would be directing Wayne from the side – my role in the main action would be minimal.

So you’d be very much in the Emile Heskey role in that situation?
In that situation, yes - I would very much be like Emile Heskey, standing off, hoping the gorilla would bounce off me, all the time looking concerned and slightly confused. But I'd be worthy of my place - no doubt about it.

Is there any team at the World Cup you’re desperate to see humiliated?
Well, Germany, obviously. With clubs, I’m strangely willing to let the hatred pass over time, - but with the Germans, it's different. I used to hate Arsenal because, well, it was the done thing - but also because they played very dull football. Once they started playing brilliant football, to be honest, I stopped hating them. I still don’t like them that much, but I don’t have the sheer frustration, irritation and annoyance in them that came when they played dull football but still won.

But with Germany, they could start playing amazing football and I would still not ever be won over. I suppose it could also be a Jewish thing. Too many years of seeing Germany do well at World Cups undeservedly has really grated on me - the team they had in Japan and South Korea in 2002 were terrible, yet they got to the final. I still haven’t really forgiven them for Harold Schumacher’s foul on Patrick Battiston in 1982. I'd like to see them punished for that. Continually.

Is there anything you love about a World Cup, apart from the football; Crap pundits? Crazy chain-smoking managers?
It’s always good to see the new pundits they unearth for TV. Sadly I’ll miss Emmanuel Adebayor’s insights [on the BBC] because I’ll be in South Africa. There’ll be lots of fabulous Brazillian woman with their bodies painted in green and gold, I always look forward to that. As for managers, I remember last time, Luis Aragones, the Spain manager, denying accusations of racism by saying “I have black, gypsy and Japanese friends, including one whose job is to determine the sex of poultry”, moments like that are fantastic, especially from a podcast point of view. Also one of the things about going is that occasionally we find ourselves invited to weird events. I’m hoping to get to go to some function where I get to see Sepp Blatter ballet dancing.

Surely it would be some sort South African tribal dance?
Sepp Blatter covered in body paint, with a loin cloth on, dancing merrily to some native African music - yeah, that would be brilliant.

That’s really something you want to see?
For a moment, yes. Then I’d want it erased from my memory forever.

Interview: June 2010. David Baddiel has reunited with Frank Skinner to host a brand new series of their award-nominated football podcasts for Absolute Radio, supported by Sony Ericsson, Official Mobile Handset of the 2010 FIFA World Cup.  Details on how to subscribe for the free-of-charge series at www.absoluteradio.co.uk