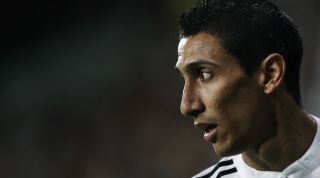 There were surely other ways for Real Madrid to solve a problem like Angel di María. Maybe force him to get a bit of work done. A new hairdo, perhaps? They could even have made the winger wander about with some books on his head in a Swiss finishing school to become that little bit more presentable.

Instead, club president Florentino Pérez has decided to offload arguably the club’s best performer last season, despite the supporters and coach Carlo Ancelotti being very much in favour of keeping hold of the Argentine.

With Real Madrid being Real Madrid, the simple answer to the question 'what was the motivation for selling a perfectly serviceable player?' is that Di María was simply not pretty enough, and that his transfer to England was needed to pay for the more marketable and fresh-faced James Rodríguez. “There is no money to keep Di María,” huffs AS editor, Alfredo Relaño. “He doesn’t sell shirts.”

Real Madrid may argue that it was Di María himself who instigated the move with exorbitant contract demands, but the fact of the matter is the player’s peg had been reassigned as soon as a certain Colombian was being paraded to his new adoring fans.

Indeed, the Argentine international’s days looked numbered 12 months ago, when Gareth Bale and Isco arrived at the club to massive fanfare. Instead, it was a huffy Mesut Ozil who took one for the team by moving to Arsenal, leaving Di María in the squad that eventually went on to win the Champions League.

Although BBC pundit Alan Shearer may have branded Di María “a Real Madrid reject” over the weekend, being unwanted by Real Madrid is a perfectly fine club to be in. The aforementioned Ozil, Raúl, Arjen Robben and Wesley Sneijder have all been chucked out of the club for (in order) having goggly eyes, being more popular than the club president and being signed by a former president.

Di María has somewhat alluded to politics being one of the reasons for his departure from the club. “They always wanted to pin the idea of leaving the club on me, but that's not how it was,” wrote the winger after his move to Manchester was confirmed. “Unfortunately, my football isn't to someone's taste.”

Real Madrid’s loss is very much Manchester United’s gain. Ignore the hefty price tag and the question of whether it was the best move for the Premier League side given their defensive frailties, Di María is very much in the top, top, top player category.

The footballer can play on either wing, behind the strikers, has a mean finish, a spiffy through-ball and works harder than you would think in the defensive department. The latter will likely be particularly evident at Old Trafford, with the Argentinean very much set to be in the “I’ll show you, you gits,” zone that was once frequented by Sneijder and Robben at Inter and Bayern respectively.

The one feature lacking with Di María that stopped him from pushing into the true Galactico category is that he doesn't scrub up as well as Ronaldo, Bale or James. If the Real Madrid training centre was like the Time Machine, then the footballer would have been forced by Florentino to live under the floorboards, being fed by Alvaro Arbeloa squeezing orange slices through the cracks.

At least Di María will now be among brethren and of the same aesthetic level as Wayne Rooney, which should help the Argentinean settle in to his new home.