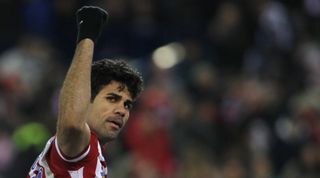 It’s been a few seasons since the Pichichi Trophy, awarded to La Liga’s top goalscorer, was won by a proper striker. In the last four years, Lionel Messi has won it three times, and Cristiano Ronaldo once. They might be the most prolific goalscorers in world football, but Messi is a false nine, and Ronaldo starts from the left.

Not since 2008/09 has the award been won by a true striker: Diego Forlan, then of Atletico Madrid. This season, one of his successors finds himself challenging for the top goalscorer prize – another South American Diego, Diego Costa.

Costa is a controversial character. He’s consistently in trouble with referees because of his feisty, aggressive style of play, and he upset many by switching nationalities last year, representing Brazil in two friendlies in March, before later accepting Spanish nationality and deciding he wanted to play for the world champions instead.

“A Brazilian player who refuses to wear the shirt of the Brazilian national team and compete in a World Cup… is turning his back on a dream of millions, to represent our national team, the five-time champions in a World Cup in Brazil,” said Brazil coach Luiz Felipe Scolari. The ultimate insult, of course, would be for Costa to score a goal that knocks Brazil out of this summer’s competition.

But Costa is yet to represent Spain, and besides, he has plenty to think about before then. He’ll have one eye on the Pichichi – even if Cristiano Ronaldo’s brace against Celta Vigo this week moved him one goal ahead of Costa – but he’ll be more concerned about the league table.

This weekend, as the season reaches its halfway point, Atletico host champions Barcelona. The two sides are currently level on points, with Atletico coming into the fixture on a nine-match unbeaten streak. With Costa responsible for 40% of Atletico’s goals so far this season, he’s sure to play a leading role.

For those who haven’t seen Costa in action before, there’s an obvious comparison. When Liverpool believed Luis Suarez was set to leave Anfield last summer, they immediately turned their thoughts towards Costa. He’s a similar player – a snarling, indefatigable centre-forward who hunts down opponents relentlessly, who works the channels tirelessly, and who has improved his goalscoring record significantly over the past 18 months. Beautiful to watch on the ball, horrible to watch when he starts getting angry, Costa is a terrifying opponent.

Like Suarez, Costa is a peculiar player – utterly unselfish with his running, pressing and tackling, but amazingly single-minded in possession. For example, in Atletico’s recent 3-2 victory over Levante [click for Stats Zone Match Centre], he received the ball 26 times but attempted to find a teammate just 12 times. In all, he actually passed the ball successfully around one-third of the time he received a pass.

With Costa, once you’ve played the ‘one’, don’t bother running for the ‘-two’. In that respect, he’s the opposite of Leo Messi, the man he’ll be up against this weekend. This is partly because Costa constantly attempts to dribble past opponents, particularly when working the channels.

However, while Costa might be wasteful in possession, he’s rarely wasteful in front of goal. The defining feature of his attempts is the frequency with which he gets shots on target – he almost always works the goalkeeper. Cristiano Ronaldo has scored one more goal than Costa this season – but the Portuguese attacker has had 130 shots to Costa’s 57.

Costa is primarily a battler. He spends the game winding up opponents, and while he uses space inventively by drifting wide, he relishes one-against-one battles against defenders. Yet his statistics involving duels are extremely poor – he’s routinely tackled when attempting to dribble past opponents – and his record in the air is terrible despite being 6ft2in and extremely powerful: he wins fewer than 25% of his aerial battles.

However, where Costa excels is at drawing fouls from opponents. He’s the second most-fouled player in Europe this season (behind Alessandro Diamanti of Bologna), which is important for an Atletico side that sees relatively little of possession, and often needs a breather and an opportunity to get up the pitch. This pattern was obvious against both Valencia and Elche in recent weeks.

Costa is particularly effective in big games against strong opposition, and he seems to thrive when Atletico are the underdogs. Perhaps that suits his mentality – always battling, always fighting – but it also suits him in a pure footballing sense, for he wants to feed upon direct balls into the channels, and attack as quickly as possible. The absence of supporting midfielders doesn’t affect his gameplan.

He was superb, for example, against Real Madrid in a 1-0 win earlier in the season – scoring the winner, helping win possession, and then constantly winning free-kicks in the right-hand channel to frustrate Carlo Ancelotti’s side.

Against Barcelona, he’ll be a huge threat. Tata Martino’s side will dominate possession, but if the full-backs advance, Costa will drag opponents out of position and attack the space in behind. He’ll be infuriating, frustrating and occasionally enraging… but on current form, he’ll probably score.

SEE ALSO From bad dog to top dog: the rise of Diego Costa