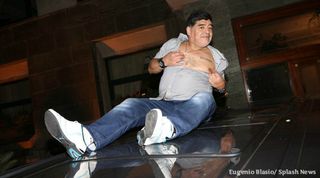 Maradona attended a ceremony in the Italian city where he played for seven years, and whose team he made over 250 appearances for.

By the end of it, however, the 54-year-old was on top of a taxi with his shirt unbottoned, and even flashed his nipples at one point.

Why Crystal Palace's groundsmen have covered Selhurst Park in garlic

An Altrincham fan is travelling 8,500 miles for an away pre-season friendly

Earlier in the evening, he was awarded honorary citizenship in the city before drunkenly trying to cut up a cake, which didn't seem to go too well (see video).

Crowds outside had gathered to see their icon, and after the celebrations he came outside on top of a taxi, singing chants to get his loyal subjects energised. The World Cup winner got on to the roof and had to be ushered down by his security staff.

Maradona was far more composed earlier in the evening as he discussed Napoli and their current crop of players.

The Argentine hero said forward Lorenzo Insigne, who has scored 49 goals for Napoli so far, can take his retired No.10 shirt if he beats his goal tally of 115.

"If he scores more goals than me, then he can wear it!" Maradona told reporters. "I hope this can be the right season for the Scudetto, as Napoli have the right experience now not to drop the points where they did last time.

"If they hadn't done that, we'd have been champions already. I think this is the right moment for Maurizio Sarri, Pepe Reina, Insigne, Dries Mertens and all the others. They can prove that Napoli can win the Scudetto."