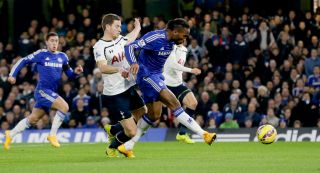 The league leaders march on, six points clear of second placed Manchester City, after ensuring the facts and stats about when Spurs last won at Stamford Bridge can be safely stored away until the next encounter.

Nelson Mandela had barely been out of prison a day when Gary Lineker helped the Lilywhites last taste success in SW6, but the early signs suggested tonight might be the night Spurs ended their barren run against the Blues.

Harry Kane headed an Aaron Lennon cross against the crossbar before firing across goal from an acute angle. But while Kane was off target, Eden Hazard, Didier Drogba and Loic Remy were ice cool and clinical, as Chelsea registered a 29th win in 35 league home games, keeping 12 clean sheets in the last 15.

Both sides made one change to their starting XI. Diego Costa accrued his fifth yellow card of the campaign in the 0-0 draw at Sunderland so was suspended, while Roberto Soldado - who scored the winner in the 2-1 victory over Everton - dropped to the substitutes' bench in place of Erik Lamela.

Chelsea flew out of the blocks, bombing down the left wing with Nemanja Matic skipping past a couple of challenges before being dispossessed inside the penalty area. But the onslaught didn't last long as Tottenham started strongly and twice threatened through Kane.

The in-form Spurs striker was made to pay for his profligacy, as the Blues blasted through the Tottenham resistance with two goals in the space of three minutes. First, Hazard exchanged a crisp one-two with Drogba before smashing low under goalkeeper Hugo Lloris.

...and Drogba went from provider to scorer soon after. Lloris' awful clearance allowed Oscar to feed the Ivorian to make it 4 goals and 5 assists in 9 Premier League outings against Spurs.

After half an hour, Spurs had enjoyed more possession and attempted more efforts on goal, but the Blues' quick-fire double meant the visitors' early spell of pressure already felt like a lifetime ago.

The hosts headed in for half-time oranges in a comfortable position courtesy of their clinical finishing.

Spurs had edged the possession (55%) but just 15% of their 199 passes in the first half had caused the home defence any concern. More of a concern to Jose Mourinho was Gary Cahill. The centre-back was forced off with concussion at the interval having earlier clashed heads with Jan Vertonghen.

Spurs hogged the ball upon the restart. In the opening 15 minutes after half-time, they made almost twice as many passes than their London rivals, but only had one Christian Eriksen shot to show for it.

And, in a similar fashion to the first half, Chelsea's killer instinct came to the fore, as substitute Remy shrugged off Vertonghen and calmly slotted home a third.

Another sub, Nacer Chadli, stung the palm of compatriot Thibaut Courtois with virtually the last kick of a game which had been settled inside 22 minutes. It was Spurs' only effort on target of the second period, having mustered the same number in the first.

Cesc Fabregas, so long the scourge of White Hart Lane as an Arsenal player, played a key role for his new club before coming off to presumably prevent a fifth booking and a ban. The Spaniard was still Chelsea's best passer (48/55), tackler (5/8) and ball recoverer (12) despite only playing 76 minutes.

While Cesc will be available at Newcastle on Saturday, Matic will not after the defensive midfield linchpin accrued his fifth yellow card of the campaign and so will serve a one-match suspension.