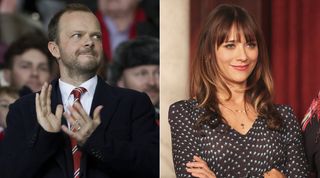 Manchester United executive Ed Woodward has approached actress Rashida Jones with a view to appointing her his new girlfriend, it has emerged.

Woodward is newly single after ending an ill-fated 10-month affair with a Scottish redhead, and is looking to move on swiftly. He has quickly identified Jones as ideal girlfriend material, and is believed to have offered her a six-year relationship.

A United insider revealed: “Ed believes Rashida has the necessary experience, vision and philosophy to be a successful, proactive lover. Her record proves that she is just as comfortable with trips to the zoo as nights in with a DVD, and she is reputed to be a demon in the sack.

“Ed’s convinced that she is the candidate best placed to placate his American investors and to shore up his brand going forwards.”

However, sources close to Jones report that she is happy with her current Munich-based partner, and unlikely to reciprocate Woodward’s desire to bring her to Old Trafford.

A friend of the Parks and Recreation star told FourFourTwo: “Maybe last year, after Rashida ended her relationship with that Catalan guy and was just hanging out in New York, she might have considered it.

“But Ed was working out back then and he still had a full head of hair. Now he’s just a paunchy, middle-aged accountant with cold, dead eyes. He has to realise he’s not exactly a catch these days.”

Further criticism came from former Manchester United player Gary Neville, who expressed his disappointment with the manner in which Woodward is handling his girlfriend recruitment drive.

“Call me a traditionalist, but it’s just not the Man United way to ask someone out on LinkedIn,” Neville said. “In Peter Kenyon’s day, he’d have sent Nicky Butt round with a note. And she’d have sent back her pants as an answer.”