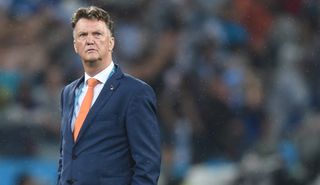 On a day with no football, this was a welcome surprise. Let's start with the excuses, and Louis van Gaal.

Having watched Holland crash out in one of the most turgid games in the history of football, Van Gaal moved swiftly to absolve himself of any blame.

"I asked two players to take the first [penalty] before ending up with Ron Vlaar," he explained, naming no names but pointing some fingers. Van Gaal was flabbergasted by the fact that none of his players stepped up in the shootout.

He assumed that beating Costa Rica in similar fashion in the previous round would have imbued Holland with an almost German arrogance. But no.

"We took those penalties in an incredible way against Costa Rica. But the issue is you score the first one and I asked two players to take the first ball before ending up with Vlaar."

However, in a move entirely at odds with his supremely arrogant front, Van Gaal then held his hand up and admitted that it had actually all been his fault. He had, he explained, signed Argentina's goalkeeper, penalty-saving Sergio Romero when manager at AZ Alkmaar. "We were the club to bring him to Europe," he shrugged. Worse than that? "I taught Romero how to stop penalties," he sighed. "So that hurts."

Still, it takes a big man to stick his hand up and take a bullet for the tea... oh, hold up, that's not an admission of guilt in the slightest there, is it.

Van Gaal was actually attempting to paint himself as the man who helped Argentina through to Sunday's World Cup final. Not Alejandro Sabella, certainly not Lionel Messi, not 'hands of God' Sergio Romero – it was all down to the great Van Gaal! He may not have a lucky golden penis, but you've got to admire his big brass balls.

Speaking of German arrogance, as we were several paragraphs back, El Diego Maradona did his part for international relations on Day 29 by claiming "the German egos will be enlarged by their win" going into Sunday's final. "Their confidence," he said, "could be a good thing for Argentina".

Argentina coach Sabella disagreed, however. "We've had to expend every drop of energy just to play in the World Cup final," he harrumphed. He pointed to the fact that Germany's game had been over after 26 minutes, while Argentina required the full 120 minutes plus penalties to beat Holland, mainly because he instructed them to play for penalties from the very start, a point he forgot to mention.

Sabella described his players as “sore, beaten, tired, the result of a war,” while hoisting up a white flag.

Elsewhere, in other news

South Korea coach Hong Myung-bo threw himself under the bus today, resigning after a woeful World Cup that saw them take one point and finish bottom of their group. "I said we would give hope to people, but we ended up giving them disappointment," said Mr Hodgso... erm, Mr Myung-bo. Bah.

In more other news, FIFA rejected an appeal from the Uruguayan football federation to reduce the ban Luis Suarez received for that bite. "The FIFA appeal committee has decided to reject the appeals lodged by both the Uruguayan player Luis Suarez and the Uruguayan FA, and to confirm the decision rendered etc etc in its entirety," said a piece of paper.

The player and federation are free to waste further time by appealing to the Court of Arbitration for Sport.

And in some other other news, Marouane Fellaini posted a photograph of himself with short hair, as in minus his trademark fright wig. This is not World Cup news as such, nor does it have much to do with football, but the sight terrified the world to a standstill yesterday afternoon so we'll mention it here.

Inevitably though, almost all the juiciest news on Day 29 still centred around the hosts, Brazil.

Defender Dani Alves railed on the haters who had dared to mock the Seleção. "I know a lot of life’s losers and idiots will make fun," he said. "But I would like to say publicly that I am privileged to be part of this group – you are the best, you are champions, you are what all the idiots will never be."

Now aside from the fact they are not the best, nor champions, and possibly not what all the idiots will never be, it's a good point well made.

Those losers and idiots should also stop blaming Mick Jagger for Tuesday's defeat. Already considered a bad luck charm for any team he aligned himself with, Brazilians had dubbed him 'pé frio' ('cold foot'), meaning a jinx. And having been in the crowd on Tuesday, Jagger was forced to defend himself against a barrage of irate tweets. "I can take responsibility for the first German goal but not the other six!" he wailed.

Yesterday, Brazilian model Luciana Giminez, the mother of one of Jagger's children, jumped to his defence. "He is suffering cyber bullying… and I would like to ask you guys who do this kind of bullying to think before you do it," she wrote. "Even though it only seems like a small thing, Mick is a person like us all, and he does not deserve to be treated this way by Brazilians."

Here here. But this was but mild badinage compared to the afternoon's main news bomb, which was dropped in the early afternoon by Neymar Jr's agent, a gentleman named Wagner Ribeiro.

Now throughout this World Cup, Big Felipo Scolario has come across rather well, shielding his young stars from the wolves looking to pull them limb from limb. He's been a bit grumpy, but he's given the impression of being a big man with a big heart. But in Wagner Ribeiro's opinion, Scolario is a repulsive "old jerk".

For reasons unclear, the player's agent wrote a mini-essay outlining what it takes to be the coach of Brazil, effectively traducing Scolario's work in six easy steps. It read...

1. "Being Portugal coach and winning nothing."

2. "Going to Chelsea and being sacked the following day."

3. "Going to coach in Uzbekistan."

4. "Returning to Brazil, taking over a big team (Palmeiras) and getting them relegated to the second division."

5. "Leaving the club 56 days before the end of the Brasileirao (season) to 'escape' relegation."

6. "Being an old jerk, arrogant, repulsive, conceited and ridiculous."

No room on that list for "Winning the World Cup in 2002", of course, which is the mark of an absolute jerk.

For some unexplained reason @wagnerribeiro also tweeted an ode to his paymaster that read: 'Neymar: humilde, do bem, generoso, criança alegre: nosso ídolo.'

As the calls for Big Scolario's head on a stick grow louder on Day 29, we can only guess that Neymar instructed his agent to unleash that guff on his behalf, so as to distance himself from the failed coach in the eyes of his adoring Brazilian public. If that's the case, for 'humble, generous, cheerful child', just read: 'massive shit'.