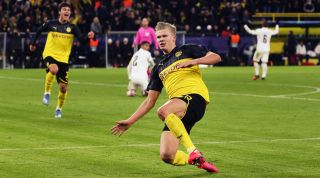 p.s. We jetted off to Dortmund last week for an exclusive chat with the boy wonder. Look out for it in our issue out March 5...

Erling Haaland was born this side of The Real Slim Shady by Eminem. His father was a Premier League footballer who had his career cut short by injury. Haaland Jr. is on his fourth club in four years. He's in a frontline with a Real Madrid star's younger brother and the best-kept marketing secret in English football. He scores with every other touch. But perhaps most unbelievably, his journey hasn't been scripted by EA for their story mode in FIFA 21.

Stars do not often present themselves in the manner that Haaland has. Usually, you have to squint through the fog for them; Cristiano Ronaldo didn't step out at Old Trafford as the fully-formed meteorite that bulldozed through the Premier League at his peak. Thierry Henry was once, incredibly, out of favour. Mohamed Salah has had his rejections, Raheem Sterling his setbacks.

Yet here is a Scandi superhero of a forward, with piercing blue eyes only focused on the opposition net. We're watching him grow up before our eyes. He's already a star. What could he become?

Last night's slow-burning win over Paris Saint-Germain showcased perhaps the only rival to Haaland's scarcely believable rise. We've seen this kind of thing in the form of Kylian Mbappe, so to see wonderkid vs wonderkid – a rising talent against now-household name – provided a fascinating insight to where the Dortmund striker could be in just two or three seasons' time.

It's easy to get swept away. A few goals against noteworthy opponents will do that for you; hype is a hurricane for a young player that will either engulf or empower. Having made light work of Liverpool, before taking on half of the Bundesliga, the world is starting to get carried away with Haaland. But still, doubt tells us that the journey can't possibly continue on an upward trajectory. Perhaps, it's because he makes it look so... easy.

It's fitting that Haaland should come to prove himself – again – in a tie against PSG. The Parisians aspire to be everything that's come so naturally to him: easily marketable, clinical when it matters and most of all, embodying a killer mentality.

That's been the difference for PSG since their owners focused all of their attention on Champions League immortality. Leads have been taken and fantastically squandered. Coaches who were thought to be tactical anomalies have been rendered normal, Emperor's New Clothes-style, by teams who proved to be nothing special.

Most frustratingly for PSG, the club have coveted Europe's brightest winners to join their crusade – Neymar and Mbappe of course, but also Di Maria, Icardi and Keylor Navas – in their attempts to foster a winning mentality. Yet the players feel bigger than the club. The club itself feels a little like a Nike pet project. PSG are throwing their weight around, demanding to be respected, only to be held at arm's length by the Liverpools and Real Madrids of the playground.

Mbappe vs Haaland was an intriguing match-up. They're different personalities – a pacy showman and a focal point, a Frenchman who revels in embellishment, against a quiet Norwegian who does only what is required of him. But the true parallel was in their self-assurance.

Whatever separates the oil from the water in football, Erling Haaland knows he's got it. He's obviously confident. He never takes a touch too many: while so many forwards his age ramble on the ball, he uses it concisely. He's deceptively quick, because he even uses his strides wisely. He's ferocious in transition – yes, he breaks his cool when need be – and frankly, the only kind of defensive test he hasn't hurdled with ease thus far is against a deep block.

And to top it all off, he's devilishly composed. He's calm in the knowledge that he's got this; he truly believes in himself. Not just because he's trying to be positive, but because he knows the game. He has electric movement, reads the game well and is unbelievably efficient – Haaland just seems like he has great football intelligence. The talent, the physicality and the mind to be world-class. This is in his blood, after all.

PSG will likely lick their wounds, re-think and calm themselves with their away goal before they go again for their home leg. You can imagine their directors, standing in front of their galaxy of Galacticos, delivering motivational speeches. Reminding themselves why they're great.

That's the difference. Haaland has arrived straight at the top and he doesn't need to remind himself why he's so good. He already knows. And now so does everybody else.