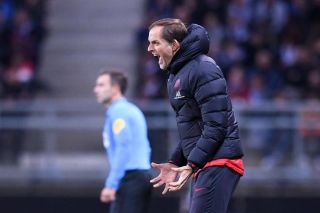 Sparks will fly during the Champions League contest between Borussia Dortmund and Paris Saint-Germain on Tuesday night: on the pitch, in the stands and even on the touchline.

PSG manager Thomas Tuchel returns to Signal Iduna Park for the first time since being sacked by Dortmund in 2017, despite helping the club win their first trophy in five years just days before his dismissal.

Despite being the only Dortmund manager to win a major honour - excluding the German Super Cup - since Jurgen Klopp’s successful tenure at the club, Tuchel’s return will not necessarily be the warmest of occasions.

His dismissal three years ago was largely down to his falling-outs with several behind-the-scenes figures at the Bundesliga club. In fact, the German had very few positive relations at BVB when the club decided to let him go.

Two of the many personnel he struggled with were former Dortmund chief scout Sven Mislintat, who left in 2017 before joining Arsenal for a year, and CEO Hans-Joachim Watzke. Tuchel’s main frustration with the pair surrounded the sales of Henrikh Mkhitaryan, Ilkay Gundogan and Mats Hummels to European rivals ahead of the 2016-17 season, even though Mislintat and Watzke managed to replace them with the likes of Ousmane Dembele, Raphael Guerrero and Mario Gotze in the same season.

It was a strange decision by Tuchel to complain about the transfer strategy which has served Dortmund so well over the years. The Ruhr Valley club generates much-needed funds by signing young players ahead of their prime years, before selling them on for heavy profits once their potential has been achieved. And repeat.

This strategy was applied with Dembele, who was moved on for €105 million 12 months after Dortmund signed him for £13.5m from Rennes, academy product Christian Pulisic who joined Chelsea for £58m last summer and Pierre Emerick-Aubameyang, signed for £12m in 2013 and shipped to Arsenal for £60m five years later.

It is a policy that is as ingrained in the club as their breathless attacking football and loud, passionate fanbase. It will likely apply to the likes of current stars Jadon Sancho and Erling Haaland once the time is right. Sancho has been regularly linked with a move back to his native England for a price tag that far exceeds the £8m fee they used to prise him away from Manchester City, while Haaland’s £20m January move was sanctioned by the Norwegian’s striker team due to the insertion of a £51m release clause.

Yet, in the summer of 2016, Tuchel was not satisfied with the way things operate at Dortmund and began a year of bickering between manager and managing directors.

Ahead of the game on Tuesday night, Watzke has said that he will not do anything special to greet BVB's former boss at the crucial Champions League match.

He told DAZN: “We worked well together for two years, and in the end things got a bit tough.

“We will certainly not become great friends in life anymore. But that was three years ago.

“It’s not Jurgen Klopp coming back.”

With Tuchel’s return in sight, Dortmund will have to prove that they were right to stick with their principles and not bow down to their former manager’s complaints. After all, the German boss isn't exactly flavour of the month within the PSG camp. Tuchel recently suffered the ignominy of a public fall-out with star striker Kylian Mbappe, after the player was substituted during a 5-0 win over Montpellier earlier this year.

The PSG manager then threatened an even bigger rift between him and his players by criticising a lavish 28th birthday party for Brazilian winger Neymar – which the entire playing squad attended, and took place between Ligue 1 matches.

Falling out with players was also an activity that Tuchel mastered at Dortmund. After the squad’s coach was attacked ahead of a Champions League clash against Monaco in 2017, Tuchel reprimanded his squad for not wanting to play the next day despite the attack leaving his players shaken and one with a broken arm.

One German source claimed that Tuchel, upon finding out that his CEO sided with his reluctant players, said in front of his squad: “How am I supposed to beat Bayern with these wimps?”

Dortmund ended up playing the following day but lost the first-leg match 3-2, and overall tie 6-3 on aggregate.

A few months later, Tuchel left and sought bigger things with a club who, unlike Dortmund, adopt a more ruthless approach when it comes to their transfer dealings.

It means Tuesday night’s battle at Signal Iduna Park is not just one between employer and former employee - it’s a contest between two different footballing ideologies.