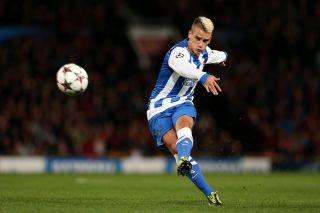 French football’s newest golden child and one of La Liga’s best players outside the all-powerful Barcelona-Real Madrid-Atletico Madrid triumvirate, Antoine Griezmann’s star is on the rise. Sixteen league goals for Real Sociedad this season make him the top scorer in La Liga not playing for one of those three clubs (and sixth overall) – and he isn’t even a striker.

A skilful whippersnapper who can play across the forward line, nominally as a left winger but equally adept on the right, don’t let his boyish, Nintendo game avatar-style features fool you. Griezmann has talent. With a host of Europe’s leading lights including Arsenal, Spurs and Paris Saint-Germain batting their eyelids at the 23-year-old, a summer move from the Basque region looks almost inevitable.

Griezmann has always had ability. Born 70 kilometres from Lyon in Mâcon, he had trials at boyhood club Lyon as a youngster, but was considered too frail to join their academy and rejected.

His career began at UF Mâconnais, where his father was a coach. After several trials at professional clubs, Griezmann was finally spotted by Real Sociedad while playing in a tournament organised by Paris Saint-Germain. Griezmann’s parents initially had reservations about sending their son off to Spain at just 14, but eventually came round to the idea.

The youngster embraced life in the Basque region and now holds this Spanish background dear, if his choice of dressing room initiation song is anything to go by. Ahead of his France debut he chose a Spanish number. “No one will know if I get the words wrong,” he reasoned with a grin.

This fusion of both French and Spanish style is a notable characteristic of Griezmann’s game. His playing style is uniquely Spanish in flavour, a consequence of his upbringing in the finishing schools of a Spanish academy, where touch and technique are the prevailing mantras. Indeed these twin ‘T’s are probably Griezmann’s fortes, along with a wonderful left foot that is both graceful and forceful, depending on the situation.

Griezmann made his Sociedad debut under Uruguayan coach Martin Lasarte in 2009, as a youngster plucked surprisingly from the club’s academy. La Real were in Spain’s second division at the time but with the help of Griezmann, who scored on his full debut against Huesca, Sociedad won promotion.

A fan favourite by virtue of his academy background (rare is the club that doesn’t like ‘em homegrown), Griezmann has since blossomed into one of Spain’s most exciting talents, helping fire La Real into the Champions League this season with this outrageous bicycle kick. Fifty-two goals from 198 appearances – most of them from wide positions – show a player with the raw ability and real potential to become a future star for both club and country, whichever club he chooses to join next.

It’s not all roses, mind. Griezmann was part of an infamous quintet of France U21 players banned from representing his country for a year after sneaking off to a Paris nightclub in a cab while on duty in Normandy ahead of a crucial Euro 2013 qualifying play-off. A mistake no doubt, but a sign of his maturity came in how the youngster handled the situation. Griezmann knuckled down, made a few changes within his entourage, including dumping his old agent, and improved his game. This prompted Didier Deschamps to call Griezmann up to the full France squad at the first available opportunity after his ban ended.

Griezmann has said that he models his game on David Silva and David Beckham, and elements of both Manchester sons' games certainly reside within the Frenchman. He is very technically sound, with panache and a lightness of touch that is both elegant and nifty, though can veer towards lightweight at times. Super quick, a bundle of energy and a real threat in wide areas (he would suit a counter-attacking style team perfectly) Griezmann is also very dangerous in front of goal. His left foot has laser-like precision, he’s tricky, direct, vivacious and, for such a slight lad, pretty good in the air too.

If Griezmann is to gather wider international recognition the challenge for him now will be to add greater consistency to his game. Dazzling at times, he does occasionally tend to drift out of games, as demonstrated during a recent two-month goal drought in which he was far less decisive.

His international debut for France against Holland was another example: Griezmann made some neat touches but wandered in and out of the game and failed to truly grab the opportunity by the scruff of the neck, raising question marks as to whether he’s quite ready for the highest level just yet.

Subdued performances and no goals from six games in his maiden Champions League campaign also support this view, though this has been his best season for goals, which highlights improving reliability. For such a skilful player he could also weigh in with more assists, so far managing just three this season.

“You only need to follow his performances for his club,” France coach Deschamps enthused after calling Griezmann up for the first time. “He is very efficient, he scores a lot of goals and he creates goals too. He can play anywhere across the attack, even if he is more effective down the flanks. He’s technically sound, brings a lot of energy to the game and is very mobile.”

Griezmann definitely has a cheeky side. He wears Spongebob Squarepants underwear on matchdays – a “lucky charm” of his that was exposed when his shorts slipped down to reveal them during a televised game. Back in 2010 he chose to celebrate a goal against Deportivo La Coruna by pelting his way to a sponsors’ car stationed on the running track surrounding the pitch, jumping in the driver’s seat with his team-mates in the back and pretending to drive it. The wee scamp.

A summer move from the Estadio Anoeta is almost a certainty. Griezmann told Diario Vasco – a Basque journal – in 2011 that he planned to stay at La Real for two or more three years in order to cement his status at the club “like a Kovacevic, Nihat, De Pedro or López Ufarte” before leaving. Three years is up.

In the same interview Griezmann commented that he planned to stay in Spain “because it’s the best league in the world” but he now looks unlikely to fulfil that wish. While others like Arsenal may hesitate, PSG are unlikely to baulk at Griezmann’s €30 million buyout clause – though some may question whether he is worth such a hefty figure. There is sure to be competition for his signature, but for now all the signs suggest he will be part of the Parisian revolution before too long.