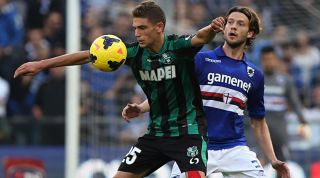 Berardi was snapped up by Sassuolo from the youth academy of Cosenza only three years ago, and the Neroverdi haven't looked back since. The youngster made his professional debut less than a month after his 18th birthday, and in a remarkable first season he helped fire Sassuolo to the Serie B title, bagging 11 goals in the process.

After winning plaudits from all, Juventus managed to tie down the attacking forward. In September last year they confirmed he had joined on a co-ownership basis for around €4.5 million, with the potential of more. He was loaned back to Sassuolo this season, where he continues to spearhead the northern side's attack.

The youngster is currently Serie A's fourth-highest scorer with 12 goals from 19 appearances. The 6ft 1in 19-year old, despite his lanky appearance, posseses a lethal turn of pace and a fierce strike that has helped him match the goal tally of Napoli’s Gonzalo Higuaín. What’s even more remarkable is that this is only his second season for Sassuolo, and first in Serie A.

The fiery forward, who can play anywhere along the front line, clearly isn't suffering from second-season syndrome. Just ask AC Milan, against whom Berardi stole the limelight by becoming the first player to score four goals against them, and the first teenager to achieve the feat in Serie A for 83 years.

Key for Berardi so far has been his versatility. He can play on either wing, behind the striker, as a lone striker or alongside a second striker, and therefore fits into most systems. Alongside this, his finishing and poaching ability cannot be doubted, as his 12 goals prove. He’s fast gaining a reputation for boasting one of the deadliest left boots in Italy. Don’t believe us? Ask Novara goalkeeper Francesco Bardi how much of the free-kick below he actually saw.

Whether it be leaving defenders for dead out wide, or faint flicks around the corner to link up play, Berardi can pull them off to devastating effect. Some have already compared him to Bayern Munich’s Arjen Robben for the way he darts past players with such pace and directness.

Promise often also comes with its problems too - and Berardi has been involved in his fair share of controversy. At the end of last season he was called up for an Italian Under-19 training camp, but failed to report after claiming he slept through his alarm. Consequently, he earned himself a nine-month expulsion from national team contention. Last season he was also banned for three games after scrapping with Livorno goalkeeper Vincenzo Fiorillo. It's all clear so far this season, though, with Berardi having been called up to an U21 camp in January.

"Berardi is a player of great talent, a modern footballer who plays for the team all over the field,” said former Milan and Italy coach, Arrigo Sacchi. "He has liveliness, intuition, temperament and strength combined with a good technique." Praise indeed - but can he keep him going? "He is an introverted youngster, but with his head on his shoulders," added Sacchi. "I don't think popularity will make him lose enthusiasm and desire to improve."

Berardi could have easily been overlooked as a professional altogether. At 15, with no serious aspirations of making it, he visited his older brother at the University of Modena, a few miles outside Sassuolo. They got involved in a game of five-a-side, as all boys like to do, and Berardi impressed his brother's friends so much that they recommended him to Luciano Carlino - assistant coach of Sassuolo’s youth side - who arranged a trial for him the following day. It didn’t last long, but then it didn't need to - Carlino could see that this lad was special. “Twenty minutes was enough for my sporting director. He took me aside and told me 'you’re right, he is the best of them all',” explained Carlino. The rest, as they say, is history.

Berardi could go on to become one of the best strikers in Italy if he continues to knuckle down and work. Presumably he will move back to Juventus at the start of next season, where he will probably compete behind the likes of Carlos Tevez and Fernando Llorente. Learning alongside the best can surely only aid his development. His versatility should put him in a good position to feature regularly, coupled with the fact he could finish top scorer in Serie A this season. If he really plays his cards right there could be a shock place on the plane with Italy this summer.