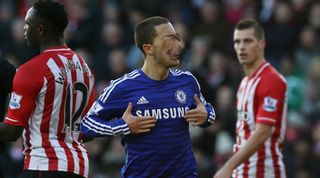 If we're being honest, Eden Hazard being up for the Young Player of the Year award again this season just isn't quite right. The brilliant Belgian turned 24 in January and is now in his seventh season of regular top-flight football. But them's the rules: all you have to be is 23 or under at the start of the season.

FFT reckons it'd be a little fairer to tweak things slightly. According to Rule 2.2 of the Premier League’s Youth Development handbook, under-21 players – generally a widely accepted age for a 'youngster' – “must be under the age of 21 as at 1 January in the year in which the season concerned commences". For season 2014/15 that's a birthday of January 1, 1993 or later.

So here are our nominees...

Lukaku has packed a lot into his short career so far, to the extent that he’s almost become passé – an outmoded character in a game rampantly churning through players in search of The Next Big Thing. “I think people forget I’m still 21,” the Everton striker commented earlier this season, and he’s right. Lukaku is only two months older than Harry Kane, for example, but while Kane experiences his virgin top-flight full season, Lukaku’s been doing it for years. It’s not been a vintage year for the talented Belgian hitman, but eight goals and four assists aren’t to be sniffed at in what’s been a season of underachievement at Goodison Park.

One of the shining lights in a dismal season for Newcastle, Perez lacks the requisite numbers to ever have a chance of topping this list, if we’re honest. But if there’s a case to be made for the man from Tenerife, it’s surely based on the Spaniard’s eyebrow-raising potential. Perez cost the Magpies just €2 million last summer, but his delicious touch and technique hint at a player already worth much more. That Manchester City are rumoured to be sniffing around is testament to Ayoze’s impact in his debut Premier League season. Five goals in 31 appearances only tell half the story.

Oh, Harry. Show us a football fan who hasn’t spent at least part of this season swooning at the Spurs hero’s extraordinary breakout campaign and we’ll either show you an Arsenal fan or someone stone cold dead inside. Or both. By now, Kane's rise is familiar to most, if not all. The goals, the glory, more goals, the England debut, the England debut goal inside 80 seconds: this has been Kane’s season more than any other player in the Premier League.

From a distance it’s been hard to decipher at times this season whether the plinth Berahino has been standing on is a podium or the naughty step. The Burundi-born striker has balanced match-winning goals and thrilling performances with court cases, off-field problems and a perceived moodiness that appears to have alienated at least some West Bromwich Albion supporters. Still, 12 goals in a team that’s only scored 30 all season can’t be overlooked. The 21-year-old looks to have a natural instinct for goal and no lack of self-confidence either.

Meeting Stones, as FourFourTwo did this week, the first thing that strikes you is the sense of purpose and drive the 20-year-old has about his own career. The former Barnsley star is keen to learn and grow in his new environment, and this enthusiasm, accompanied with a large dollop of talent, helps explain why Evertonians are so excited by their young centre-back. Injuries have curtailed Stones’s progress at Goodison Park this season, but when he’s played the England international has shown why he’s considered the long-term answer to the Toffees’ defensive woes.

“A big weight off my shoulders” is how the 20-year-old described his first ever league goal for Southampton in April against Hull. The wait for ‘Prowsey’s first Premier League goal had become something of a burden for the midfielder, but with six assists in a season hampered by injury, the baby-faced England Under-21 international is developing into a thoroughly decent player. He takes a mean set-piece, too.

While Kane has hoovered up all the headlines at Tottenham this season, Bentaleb has been if not equally important, then close to it. Another youngster at White Hart Lane who credits a certain Mr T. Sherwood for his emergence at first-team level, Bentaleb has become central to Mauricio Pochettino’s plans, diligently scurrying away in midfield breaking up play and keeping things ticking along for the Lilywhites.

It took Brendan Rodgers about a month of the season to learn his first big lesson: if you want a team built on high-pressing and intense hustle, don’t spunk £16m on Mario Balotelli.

Lesson number two? If you want to leverage your bargaining position in a contract negotiation, don’t describe the asset you’re trying to low-ball – in this case Sterling – as “the best young player in Europe”.

Little wonder the youngster's agent had pound signs in his eyes given such resounding praise for his client, and Sterling’s numbers this season – an average of a goal or assist every other Premier League game – again prove his worth.

Star of Snapchat, lover of jazz balloons and still one of the league’s best youngsters.

Sorry guys but this one’s a no-contest: it has to be Harry.