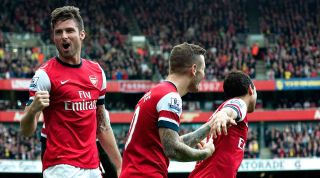 1) Ozil, Cazorla and Wilshere CAN play together

Pundits and fans alike questioned whether Mesut Ozil and Santi Cazorla could operate in the same team. This performance and result squashed any doubts, largely down to Arsene Wenger’s tactical acumen.

The Arsenal boss deployed Jack Wilshere on the right of an attacking midfield three, with Ozil through the middle and Cazorla out wide on the left. However, Norwich struggled to combat their threat because the trio kept interchanging positions, especially Wilshere and Ozil. When Arsenal were in possession the German lurked menacingly on the right, but it was Wilshere who supported Bacary Sagna when they lost it.

Their work in the final third was devastating. Ozil hit a brace, while Wilshere scored one and made one. The two players topped the charts for passes made in the attacking third. The exquisite opener from Wilshere encapsulated all that is good about the north Londoners – simnultaneously simplistic and intricate, a close-passing move sprinkled with flair and finished with aplomb.

For all the fireworks set off by Arsenal’s creative forces, there was one man who went about his work with little fuss. Mikel Arteta’s performance might not have been spectacular, but it was effective and enabled the artists to paint their masterpieces.

Starting alongside Mathieu Flamini behind the attacking-midfield trident, the Spaniard helped police the back four, keep possession and launch attacks. The game’s top passer, finding a team-mate with 89 of his 94 attempts for a 95% success rate, he also made 11 ball recoveries – more than any other player.

Unless you adopt a back three, playing five midfielders – even an attacking array like Arsenal's – means you can only field one striker. However, the combined efforts of Sebastien Bassong and Michael Turner couldn't stop Olivier Giroud. In a 4-1 win you would have expected Arsenal’s lone striker to have found the back of the net. He failed in this respect, denied by an excellent John Ruddy save in the first half, but excelled on so many other fronts.

The Frenchman’s smart exchange with Cazorla and then Wilshere set up the latter for an early goal-of-the-season contender: his deft flick to put Wilshere through was nothing short of magnificent. He then whipped in a pinpoint cross for Ozil to head home the second, at a crucial time in the game as Norwich started to push the Gunners back.

Giroud’s link-up, especially in and around the 18-yard box, enabled Arsenal to get the ball into dangerous areas as Norwich did their best to block the path to goal.

The scoreline suggests Arsenal completely dominated the game. This was not the case. As Wenger conceded, between the half-hour and hour marks, the visitors were the better team; the start of this period coincided with Flamini’s departure. The tenacious midfielder stumbled off in the 37th minute after he suffered concussion following a clash of heads with Alexander Tettey.

But while the Canaries had enough of the ball to do some damage, they couldn’t find their range in the final third. Of their 131 attempted passes in enemy territory only 88 were successful – a 67% success rate.

Besides which, the exit of Flamini introduced another defensive problem for the Canaries: the introduction of Aaron Ramsey. The Welshman was simply brilliant, finishing coolly after a mazy run and laying on the fourth for Ozil. As Michael Cox noted on Friday ("Why table-toppers Arsenal may be in a false position"), Ramsey's run of amazing form surely can't last forever, but Arsenal should enjoy the confidence of a player reborn.

Chris Hughton’s team may have been wayward with much of their passing in the final third, but they still managed to create a number of chances. They registered 12 attempts on goal, six of which found the target. Now, it would be easy to criticise the Canaries’ poor finishing, but they were forced take aim from distance: only two of their shots at goal took place inside the 18-yard-box – including Jonny Howson’s fine finish.

But Arsenal had the game’s two best tacklers in Ramsey and Kieran Gibbs. They also led the way with ball recoveries with Arteta, Laurent Koscielny, Gibbs and Ramsey recovering the precious sphere more than any other Norwich player. They made 15 interceptions and successfully cleared their lines 12 times. Norwich just couldn’t get a clear sight of goal.

ANALYSE Arsenal 4-1 Norwich with Stats Zone, now in your browser