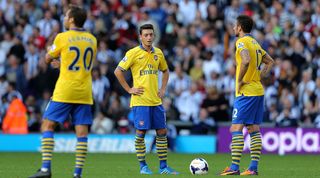 After seven games of the Premier League season, Arsenal are sitting pretty at the top of the table. But how good have their performances been – are the Gunners genuine favourites for the title, or have they been slightly fortunate at times?

After all, this has been a highly unpredictable campaign – there are now no unbeaten sides. Arsenal are top, but their points total of 16 is the second-worst for a league leader at this stage. Only the Manchester United side of 2000/01 had fewer points – although they went on to win the league comfortably.

So far, perhaps the most interesting thing about Arsenal’s performances is their relatively low possession count – 54%. Yes, that still means they’ve had more of the ball in the majority of games, but it’s merely the eighth-best average of the 20 Premier League sides.

This is unusual for Arsenal, whom we’ve been accustomed to seeing as the league’s most possession-dominant team. The season is still young, and their average ball time will probably improve following Saturday’s home match against Norwich, but it points to a more pragmatic Arsenal this season.

For example, they were completely outpassed away at Swansea:

That might not be unexpected, but at home to Stoke the possession was almost even, which is remarkable.

Interestingly, Arsenal’s pass completion rate remains very high, the third best in the division. The fact that Arsenal are retaining the ball efficiently, yet not dominating possession to such an extent, points more to a defensive approach without the ball – they’re sitting back more. The emphasis upon a strong defensive shape was also in evidence at the start of last season, however, before Arsenal started pressing more later on.

In the 1-0 win over Tottenham, they recovered the ball in deeper positions than in the same match last year.

There’s also an interesting pattern in terms of shots. In raw terms, Arsenal have only attempted the fifth-most shots in the division, 101; Tottenham, for example, have attempted 30 more. But Arsenal have recorded the second-most shots on target, 42 – with only Manchester City one ahead.

This means one of two things: either Arsenal’s shooting accuracy is particularly impressive, or they’re creating better, clearer chances. The answer is probably a blend of the two. At Sunderland, for example, Arsenal had fewer shots than the Black Cats, but from much better positions.

The obvious difference is Mesut Ozil – the Premier League’s leading assister despite playing only four games. He’s created four chances per game, an extremely high figure which is unlikely to be maintained over the course of the season – David Silva and Juan Mata have topped this chart at the end of the previous two campaigns, with an average of just over three chances per game created each.

At the back, Arsenal’s statistics are again surprising – in that they're neither comically terrible nor frighteningly good. They’ve conceded 12.9 shots per game this season, only the 10th best record in the league – slightly more than West Brom, slightly fewer than Stoke. They're similarly mid-table in terms of goals conceded, but they’ve kept only one clean sheet all season.

If Arsenal continue to allow the opposition chances, better strikers will punish them. Their previous match, a 1-1 draw against West Brom, exemplified how fortunate they’ve been – Anelka missed a one-on-one, then spurned a simple tap-in when he got the ball stuck under his feet. A clinical finisher would have scored those chances, and Arsenal would have been 3-0 down. Soldado also had a couple of decent opportunities in the North London derby.

So far, the statistics don’t quite support Arsenal’s status as the best team in the division – even if the results do. Perhaps Arsene Wenger’s side have a legitimate excuse for not racking up the numbers: having regularly taken the lead in matches, they have therefore been able to sit back – meaning a relative lack of shots and possession, and more opposition shots than you’d expect.

Arsenal must also be prepared for the form of Ozil, Aaron Ramsey and Olivier Giroud to waver slightly. That’s not to suggest that any of that trio will start playing badly – merely that their statistical output so far is almost certainly unsustainable over 38 games.

Ozil’s chance creation stats are off the scale (although there’s a legitimate argument for him being Europe’s best creator), while Ramsey’s goal and assist output is impossible for a central midfielder to produce over a long period. Giroud, for all his quality, relies on service and might not receive it regularly during some matches.

...but here comes the cavalry

However, where Arsenal excelled last season was in spreading the goals around. Giroud, Theo Walcott, Lukas Podolski and Santi Cazorla all reached double figures in the Premier League, only the fourth time that four players from one club have managed that.

Similarly, three of the top seven assisters in the Premier League last season were Arsenal players – Podolski, Cazorla and Walcott. All three have yet to play a significant role this season, something overlooked because of Arsenal’s good form.

If Podolski, Cazorla and Walcott can replicate their form from last year, Giroud, Ozil and Ramsey’s inevitable off days won’t matter as much, and Arsenal can mount a serious title challenge.