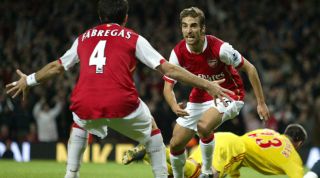 Guus Hiddink has gone through the same process with Cesc Fabregas as Jose Mourinho did this season, albeit realising the Spaniard’s strengths and weaknesses far sooner than his predecessor. For Chelsea's 3-3 draw with Everton, Fabregas was taken out of central midfield and given a free role in the No.10 position, and to great effect; it could be the decisive factor this weekend as the former Arsenal player is matched up with Mathieu Flamini.

Fabregas had 97 touches of the ball against Everton (more than any other player) and created three chances, ending the match with a goal and an assist. Hiddink has perhaps realised that Fabregas is not agile or hard-working enough to function as a box-to-box central midfielder, but is still superb at ghosting unseen into pockets of space between the opponents’ midfielders. Muhamed Besic and Gareth Barry managed only two interceptions between them last weekend.

Flamini continues to be the question mark in Arsenal’s team despite their good run of form in Francis Coquelin’s absence. Against trickier attacking midfielders he is often outplayed, such as by Sadio Mane in the 4-0 defeat to Southampton and Roberto Firmino in the 3-3 draw with Liverpool. The Frenchman failed to make a single tackle or interception in the No.10 zone in either of these games. It is certainly worth keeping an eye on here.

Few of the weaknesses that have undermined Chelsea this season have been fixed by Hiddink. All three goals conceded last weekend came down Chelsea’s right, with the first and third in particular fitting a very familiar pattern: Branislav Ivanovic remains vulnerable (though he's still netted a new contract).

Theo Walcott has started on that side of the pitch in each of the last seven league games, so it is highly likely that he will be Ivanovic’s direct opponent this weekend. Walcott’s pace on that wing is likely to prove a major distraction for the Chelsea defence and keep Willian and Ivanovic occupied. On the overlap, Nacho Monreal could play a big role in breaking through the Chelsea backline.