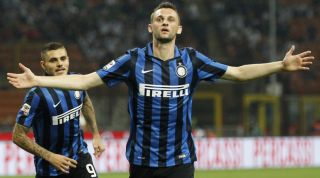 January is generally notable for one particular event in football, but for Marcelo Brozovic this one could be a time to reflect on some extraordinary progress.

Four-and-a-half years ago, ‘Brozo’ was finishing his debut campaign in miserable fashion as boyhood club Hrvatski Dragovoljac finished bottom of the Croatian top flight. Fast-forward to the present day, and the midfielder has completed a year with Inter and done enough to attract overtures from the likes of Chelsea, Arsenal and Barcelona.

The Nerazzurri man has shown an ability to take on every new opportunity in his short career so far. Despite Dragovoljac’s unfortunate demise, that campaign earned Brozovic a move to Lokomotiva Zagreb. One season later he’d achieved not just a move to the top table of Croatian football, Dinamo Zagreb, but also a place in the Croatia’s under-21 team.

It was during his first two seasons at Dinamo from 2012-14 that Brozo truly flourished, winning the league title twice and gaining valuable Champions League and Europa League experience as well as breaking into Croatia’s senior team.

On returning to Dinamo for the 2014/15 season a move seemed inevitable eventually, and Inter came knocking in January 2015 to secure an 18-month loan deal with the obligation to buy. Brozovic arrived at a tumultuous time in Milan, but has settled well since and survived the club’s summer squad revolution to become a key factor in their title charge.

Brozovic’s continued improvement despite having to adjust to a number of new clubs (four in five years) has been impressive. Whether it was the jump from Lokomotiva to Dinamo, Croatia Under-21s to the World Cup or domestic Croatian football to the San Siro, bumps on the road have been minimal.

It took only 90 minutes of game time to convince Croatia boss Niko Kovac that he was worth a place in his 2014 World Cup squad. The then-21-year-old made his international debut against Australia in the final World Cup warm-up game, and got the nod from Kovac soon after. Though a 30-minute substitute appearance in the tournament opener against Brazil was to be his only contribution, it underlined a fizzing potential.

Given that the Croatian is now still only 23, there’s no reason to believe that his growth as a footballer will end here. Although he’s yet to replicate the impressive attacking figures of his Dinamo days in an Inter shirt, Brozo has slowly but surely become an integral part of Mancini’s plans.

The former Manchester City boss has tinkered with his formation regularly this season, but Brozovic has made 15 appearances – nine of them starts – and scored twice. Despite competition for places from the likes of Gary Medel, Felipe Melo, Geoffrey Kondogbia and Fredy Guarin, the 23-year-old has forced himself into contention with some impressive showings.

Just how crucial he really is could soon be tested, with the aforementioned Premier League duo being joined by Borussia Dortmund and Barça in the list of interested parties. Inter have reportedly set a £11-15m price and could be tempted to sell if offered a substantial sum given their lack of manoeuvrability in the market this month due to Financial Fair Play rules.

Brozovic’s agent Miroslav Bicanic told Corriere dello Sport earlier this month that the question of an exit “depends on the transfer market and various interested clubs, but Inter will decide his fate”.

If anyone was still in doubt, Bicanic went on to declare: “Last week I was in England, but I promised I wouldn’t reveal the names of the interested clubs.”

Brozovic is a technically proficient footballer, equally capable of providing assists and goals. He’s a creative spark with excellent vision and passing, and is a real danger from distance – his goals against Cagliari and Udinese this season were very similar and equally sensational.

Another string to the Croatia international’s bow is that he’s a versatile midfielder who can be used in a number of roles – central midfield, defensive midfield, attacking midfield and on the right flank. Brozovic’s adaptability is also one of his strong suits, given the changes he has already overcome in his short career.

Premier League suitors would undoubtedly be wary of his physical attributes, given the league’s reputation for favouring strong players in comparison to Serie A.

Despite being quick and agile, Brozovic doesn’t possess the most imposing frame and his lack of strength (31% of tackles won this season) and poor ability in the air (36% duel success rate) could cause concern.

Just transfer market talk or heartfelt opinion? You decide. At the start of the month Mancini said that “if Brozovic were to continue like this he would become one of the best”.

“We don’t want to sell him, even if faced with a great offer,” he continued. “He must work, but he has incredible quality.”

When Brozovic made his Croatia U21 debut in a 4-0 defeat to Switzerland in September 2011, he lined up alongside Mateo Kovacic in midfield.

Kovacic took the same route as Brozovic, from Dinamo Zagreb to Inter in 2013, but their paths would only cross at San Siro for half a season before he left for Real Madrid last summer.

It’s hard to imagine Inter wanting to get rid of Brozovic in a hurry and the ball is in their court, with the right to buy from Dinamo for £6.1m set for July.

However, Mancini has lamented the fact that their hands are tied in terms of bringing in January reinforcements due to Financial Fair Play restrictions. If Guarin’s multi-million pound move to China goes ahead, Brozovic’s sale looks unlikely.

If not, a substantial offer could tempt the club’s hierarchy, but for the meantime the Croatian will be focused on the Scudetto chase and continuation of his remarkable personal development.