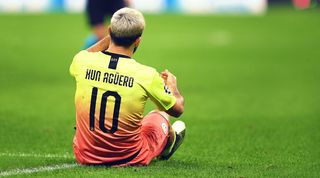 Football has reached the edge of the precipice. UEFA’s decision to charge Manchester City and ban them from the Champions League for two years will be appealed, but would seem to mark a point of no return, regardless of outcome.

The considerable momentum for a Super League, a desire shared by a cabal of the game’s wealthiest clubs, is now only likely to increase. In attempting to preserve the integrity of Financial Fair Play, UEFA is casting itself as an obstacle to sporting megalomania and that, inevitably, will bring the threat of revolution even closer.

What an incredibly selfish movement that is, too. So much time is spent pondering the form and constitution of a trans-continental league, that not nearly enough energy is dedicated to seeing it for what it represents. Financial greed, of course, but also a declaration from those at the top of the game that states that they're content for the entire sport to suffer. That their ambition matters to the exclusion of everything else and that any price is worth paying for its satisfaction.

Consider the consequences for English football. If four or five teams were to depart the Premier League, its entire legitimacy would be affected. Winning competition would carry an asterisk, as would all of the domestic cups, and the commercial appeal of both the league itself and the teams taking part would be severely compromised. Which is to say nothing at all about the clubs further down the pyramid.

It’s an obvious irony, of course, because the Premier League was founded on the same callous disregard for others. The formation of a Super League is a step beyond, though, given that it would be a strike against national primacy and the sport's authorities. English football – or Spanish, Italian, German and French – would still exist in a literal sense, but only in an emaciated way.

In effect, that existence would be as an inferior product. Again, it could be argued that such a situation exists now, in this country, between the Premier League and Football League. Not so. While there are obvious disparities between the two, they are at least connected – there is a route from one to the other which isn't blocked by legislative obstacles.

In as much as we know about the elite’s intended direction, that wouldn’t be the case with a Super League. It wouldn’t quite be ring-fenced, but the risk to those involved would be minimised to an almost pointless extent. Once you’re in, you’re in. The world and its bounteous rewards are yours, forever.

The consequences would be devastating. Maybe not immediately, but certainly over the course of a few decades. Where would the next generation of fans for teams not involved come from? Given the blanket coverage that such a league would attract, replete with its own broadcasting licenses and computer games, what would be left to usher younger supporters towards teams that have been excluded?

The answer is that those involved in this plotting couldn’t possibly care less. It doesn’t matter to them. In fact, their hope would be that future generations are actively diverted away from their local teams and are divided instead, evenly, between one of twenty clubs. It seeks to create a situation in which the Spanish support Real Madrid or Barcelona and never anybody else, the English are City, United, Chelsea or Liverpool, and so on, etcetera.

What of other parts of fan culture? If clubs were playing week-to-week games in different countries, how would supporters afford the travel costs and ticket prices? Again, the architects aren’t concerned with that kind of fine print.

They’d reason instead, presumably, that clubs have fans all over the world and one Barcelona (or Real Madrid, Manchester United or Juventus) supporter is the same as the next, regardless of whether they’re a season-ticket holder or a television fan. Currency doesn’t matter, only money. If someone can buy a replica shirt and a ticket, then the human element is irrelevant and the old community tethers are best forgotten.

The level of disrespect is unconscionable. That this plan has any future at all describes a near-total disregard for the form, roots and history of European football. Worst of all, that intended abuse isn’t the scheme of sportsmen at all, but businessmen determined to break the game into little pieces, then reassemble it in a way that serves their aims.

How dare they. How dare they. It is not their game. It does not belong to them. The hobby and pastime of an entire planet worth of people could be contorted, disfigured by a group of individuals on the basis that it doesn't allow them to make quite enough money. Or because it doesn't provide enough of a fig leaf for a country's human rights abuses. Given what's at stake, it's a pathetically weak justification.

And yet there’s no hiding from this. It seems certain to happen and the only thing that can save European football from a Super League is its implementation and subsequent failure. By then, though, what will even be left to salvage?