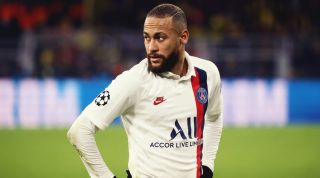 It's no secret that money plays a big role in European football.

If you're going to be successful in the Champions League, the chances are that you'll have to spend. And boy, have there been some eye-watering sums of money spent by the big teams in Europe in years gone by.

But while Europe's are always going to flash the cash, sometimes it's a little difficult to remember who they actually bought.

It sometimes seems obvious, but record signing quizzes can often throw up a fair few names you never even thought of. That's our only clue for this one, folks.