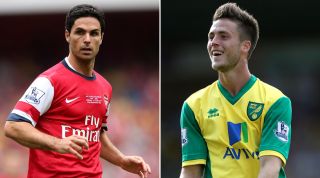 Who cares? England are going to Brazil!

Arsene Wenger faces one of his biggest tests of the season. Sorry Norwich, not you, but a selection headache every manager would love to have and hate to deal with in equal measure.

Arsenal’s Spanish conjuror Santi Cazorla is back from injury – great news for Gunners fans, right? Put him straight back in the team? Absolutely. Who will he replace? Mesut Ozil, the Gunners new creator-in-chief? Err, no. Even with a bruised knee the assist machine will be pushed out on the pitch, given the ball and asked to blast holes through the Norwich defence.

The obvious solution is to play them together, but what’s that phrase about too many chefs?

Wenger could accommodate both by playing one out wide on the left and other through the centre. But then where will Jack Wilshere play? The Frenchman can’t drop the in-form Aaron Ramsey and he must protect the back four with either Mikel Arteta or Mathieu Flamini. And there’s still Theo Walcott, Lukas Podolski and Alex Oxlade-Chamberlain to return from injury. Oh, and Tomas Rosicky.

Balance is key to making this tantalising partnership work – it will require some adaptation from the rest of the team – but if they can get the equilibrium right, it could be devastating.

However Arsenal set up, Norwich are going to have their hands full. Third-from-bottom and coming off the back of a 3-1 loss at home to Chelsea, the Canaries should be cannon fodder for the league leaders.

Chris Hughton’s team have lost two of their three games on the road this season. The last time they beat Arsenal on their own turf was 21 years ago when they won 4-2 at Highbury – the season they finished third and qualified for the UEFA Cup.

During that period Norwich have only managed one other victory against Arsenal in 14 contests and that was last season’s 1-0 win at Carrow Road.

The Canaries’ most recent three points in the Premier League came away at Stoke City, but an in-form Arsenal are a different prospect altogether.

Ozil picked up a knock for Germany during their 5-3 win over Sweden, but according to early reports it’s just a bruised knee and he should be fit to play on Saturday. Cazorla is set to return to the fold and will potentially be joined by Rosicky and Yaya Sanogo.

Anthony Pilkington is a doubt for Norwich after he pulled out of the Republic of Ireland squad with an injury.

Arsenal’s team is full of diminutive, technicians, who buzz around the pitch, popping short, incisive passes around the opposition. But they do have a focal point to their attack. A 6ft 3in Frenchman, blessed with movie star good looks, a deft touch and a healthy liking for close quarter combat. A 21st century target-man.

After a solid start to his Arsenal career, Giroud has really taken off this season with six goals in 11 games. While net-ripplers are a prerequisite for a striker, his link-up play has also enabled the Gunners to play off him in dangerous areas. During the Gunners’ 3-1 win over Sunderland the French striker scored one and made one. He created another chance that Arsenal failed to convert and won six of his 11 aerials duels – the best record on the pitch.

On Saturday it will be Bassong’s job to keep Giroud quiet. It’s unlikely Arsenal will pump it up to the big striker, but that could play into the Cameroon defender’s hands. Against Southampton, a side very much in the mould of the North Londoners, Bassong made three interceptions – more than any other player – and six successful clearances. He dispossessed a Saints player with each of his three tackles to help his side shut out Adam Lallana, Rickie Lambert and Dani Osvaldo, and secure a 1-0 win.

Hughton needs a win, or else things could get very bad, very quickly for the former Newcastle boss. After their visit to Emirates Stadium, Norwich host Cardiff, before travelling to both Manchester clubs. If results go as expected, that would leave the Canaries in a dire situation after 11 games. Unsurprisingly, he’s among the favourites to get the sack first.

At the other end of the spectrum stands Wenger saying, “I told you so”, once again. He’ll be keen to see his side get back to winning ways after a draw at West Bromwich Albion in their last game. It’s another test of Arsenal’s title credentials, but one they should pass with ease.

There will be a lot of tired international players returning to Arsenal’s ranks this week, but with all their firepower and confidence they should blow the Canaries away. Home win. 3-0.