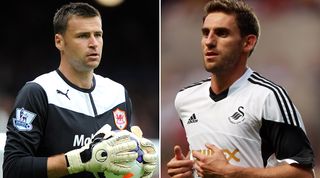 The first ever top-flight South Wales derby (and their first meeting since February 2011).

And so everybody associated with the 18 English top-flight teams collectively ducks as the much-dreaded South Wales derby gets its first outing in the Premier League. Truly, Cardiff vs Swansea is a Hallowe’en tale of fan violence, blood flowing down the M4 and severed heads plopping into the River Taff.

It’s really not that bad. Yes, there has been trouble in the past. Yes, match-goers are often transported in a police ‘bubble’ (with accompanying helicopter). And yes, the two sets of fans really hate each other, with a passion that makes Newcastle and Sunderland supporters look like grannies squabbling over a lunch bill.

But things have changed. The Swans have gone continental and the Football League named Cardiff as Family Club of the Year twice in the last three seasons.

Historically it’s an even derby: neither team has won by two or more goals in their last 12 meetings, and neither has ever done the league double over the other across the 28 seasons they've occupied the same division.

Swansea chairman Huw Jenkins has downplayed this meeting’s importance, saying both teams would just rather finish above the other (hardly over-reaching in Swansea’s case), but Angel Rangel has turned up the heat a bit. The Swans right-back has said about Cardiff’s combative £11m signing Gary Medel – yet to be booked this season – that “if you are clever, you can get him sent off” and also that the Bluebirds overpaid “because he’s a holding midfielder, not a goalscorer”. Because if there’s one person you want to rile, it’s 'Loco Boy' Gary Medel.

Passion might be what both teams need. Cardiff were toothless at Norwich and a win would be an almighty boost. Swansea would appreciate a lift after a disappointing stalemate hosting West Ham.

Ankle-knacked Andreas Cornelius is close to a return for Cardiff (pretty sure we write this every week), although even if he is match fit it would be a brave call by Malky Mackay to give him his first league start in this derby. The Bluebirds have no other injury concerns.

Swansea’s Jonjo Shelvey should return from a hamstring injury to take his place on the bench. No such luck for Ben Davies, still nursing his ankle with frozen peas. Probably.

Even away from home it’s probable that Swansea will dominate possession. Last week they had 67% of the ball (not literally) against West Ham while Cardiff’s opponents, Norwich, had the top eight passers and 20 of the top 22 pass combinations.

As such, and as depressing as it sounds in a home derby, the onus may be on Cardiff to defend and then break. Ben Turner and Steven Caulker are growing as a defensive partnership, wherein Turner handles the clearances (17 against Norwich, 14 in the win over Manchester City) and Caulker the counter-attacks (he started the move for Cardiff’s equaliser against Hull).

Here they’ll have to deal with Michu’s dangerous late runs into the box while also handling Wilfried Bony or Alvaro Vazquez up front. Communication between the centre-back pair will be vital, as will the young Caulker’s concentration levels up against his old team.

This is Mackay’s first South Wales derby and it’ll be interesting to see how he approaches it, mentally as well as tactically. His predecessor, Dave Jones, used to play down the derby element, even saying it should be treated as any other fixture.

Michael Laudrup gives the impression of being above such nonsense, but he’s also clued into Swansea fans and what they like to see. He’ll ask for an extra 10 percent from his side.

Fun fact: it’s likely that, between them, the managers will start a single Welshman in this match. That’s Neil Taylor; it’ll be one each if Craig Bellamy gets a recall.