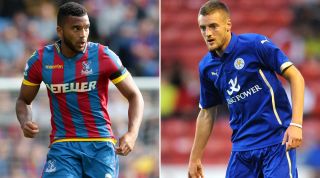 Fearless Foxes face first 'lesser' side of the season. Or is it the second?

If Leicester would come down from that cloud for a minute, someone can tell them they’ve got another game coming up this weekend.

The newly promoted Foxes were supposed to view this weekend’s fixture at Selhurst Park as welcome respite following a hideous run of opening fixtures, yet instead travel to south London buoyed by Sunday’s exhilarating 5-3 win over Manchester United, and with just one defeat to their name at Chelsea.

Nigel Pearson’s plucky side had already held Everton and Arsenal at home before winning at Stoke with their backs to the wall, but blew their season achievements out of the water with a rousing comeback from 3-1 down against Louis van Gaal’s beleaguered Reds.

Now, with a third straight win in their sights, Leicester must adapt to very different surroundings at Selhurst.

The Foxes haven’t enjoyed the lion’s share of possession in any game this season, instead hitting opponents on the counter and using their width to good effect. Now they face one of only two teams to have enjoyed less average possession this season (the other being Villa).

Crystal Palace themselves picked up a shock win at Everton last weekend, coming from a goal behind to win 3-2 – the same scoreline they achieved at Goodison Park last season.

With their first league win in the bag, Neil Warnock’s men must now go about hauling themselves away from the foot of the table.

Shoring up a leaky defence which has conceded three goals on three occasions already this season would be a good start for them, if not the neutrals.

Palace are a world away from last season’s keep-it-tight grafters, pooh-poohing organisation in the name of a good time. Their games are already averaging 3.6 goals, compared with last term’s league low 2.13.

On Wednesday they were forced to extra-time against Newcastle after equalising in the last minute through teenager Sullay Kaikai, before contriving to lose 3-2 with a man advantage after Mehdi Abeid was sent off. Unlike Leicester, who decided not to bother with the competition this year by getting knocked out at home by serial giant-killers Shrewsbury in the previous round.

If the season has told us anything about these two sides so far, though, it’s to expect goals. All eight of Palace’s scorers have come from different players, with five of Leicester’s nine going the way of Leo Ulloa.

Both sides are light on the injuries. Palace are without only Stuart O’Keefe (ankle) with Marouane Chamakh returning from a hamstring problem, while Matt Upson (foot) is Leicester’s sole (long-term) absentee.

Ward may well have watched Vardy’s performance against Manchester United from behind the sofa. The Palace left-back looks to have his work cut out against the industrious Foxes forward who tore the Reds to shreds at the King Power Stadium by winning both penalties and netting Leicester’s all-important fourth goal.

"Whenever you’ve got pace in your side, no matter who you play against, there is potential for causing people problems," said Leicester boss Pearson after the United win.

The Stats Zone screen below shows the former Fleetwood man – who was still at Northern League Stocksbridge when team-mate Esteban Cambiasso won the Champions League with Inter Milan in 2010 – wasn’t confined to the right flank, but caused the bulk of his damage down that side in his man-of-the-match display. No player created more chances (5), while his tireless running troubled both Rafael and Marcos Rojo all afternoon. Expect him to switch flanks and busy Kelly on the other side, too.

Warnock and Pearson have faced off on seven previous occasions in charge of five different clubs, all in the Championship.

Pearson leads the head-to-head battle 3-1 after masterminding two wins for Leicester over Warnock’s Crystal Palace and QPR sides in 2009/10, and another over Leeds two seasons later.

Eagles chief Warnock was interviewed for the Leicester job by Milan Mandaric in 2007, only for the Foxes to plump for Martin Allen instead.

The appointment proved disastrous: Leicester went through three permanent managers that season en route to relegation from the Championship, before eventually hiring Pearson for the first time.

And here’s another thing: the last time this was a top-flight fixture, Palace were being managed by Attilio Lombardo (April 1998). Leicester won 3-0.