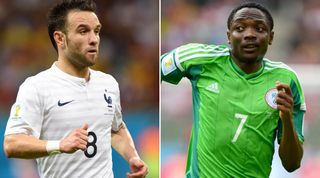 France strolled through their group at a canter. They hurdled Honduras, steamrollered the Swiss and equalled Ecuador in a 0-0 draw that probably would have been a drubbing had it not been for some outstanding goalkeeping from Alexander Dominguez.

Nigeria's concern here will be that Didier Deschamps' men have found an attacking groove. In Karim Benzema, the French possess an in-form striker who is able to find the net and bring team-mates into play. When the French tick, with the Real Madrid striker as their heartbeat, they do it in style.

But Nigeria have an attacking prowess of their own. They scored twice against Argentina in their final group game and probably would have won had it not been for the brilliance of Lionel Messi. In Ahmed Musa - who grabbed both goals - they have a man very much in the moment. Neither team will apply the brakes here.

"After two games that had raised many hopes against Honduras (3-0) and Switzerland (5-2), the Blues have delivered a much more laborious partition Wednesday night against Ecuador (0-0). Is this serious before the eighth-final against Nigeria, Monday? Not really." - L'Equipe.

"It is not the best of news for a Nigerian team that zoomed into the second round of the World Cup with France as their next opposition.One of the new kids on the block, Babatunde Michel has been ruled out of the remaining matches of the World Cup due to injury. But you can't knock Babatunde for staying down longer than most after the sickening injury which forced him from the field immediately. It is understood the 21-year-old will have surgery on his arm and be sidelined for his team's do or die match against France." - Vanguard.

When Musa scored twice against Argentina, the CSKA man became the first Nigerian to grab a brace in a World Cup finals fixture. He also scored the country's fastest ever goal when he netted after four minutes. Musa will be without strike partner Babatunde Michel, but he operates mainly on the left and will give Sagna his fair share of problems, should he hit the same levels of form as Wednesday's performance.