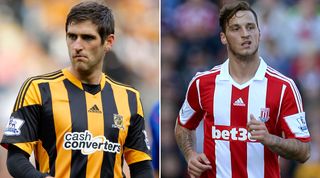 One not to watch over dinner.

OK, so maybe we’re being harsh. After all, Hull are mid-table after an impressive start in their Premier League return, while Mark Hughes’ made-over Stoke are just a point and place behind after beating Chelsea last time out.

This weekend’s hosts might have been rubbish on their travels so far this season (one win in eight), but at the KC Stadium things are very different. The Tigers have lost just once – to Crystal Palace of all sides – and won four, including a 3-1 victory over high-flying Liverpool in their most recent outing.

Steve Bruce won’t be counting his turkeys (come on, it’s Christmas) just yet, but the joyful Geordie will be chuffed to bits with his men after 15 games.

They’re only three wins away from matching their debut Premier League campaign of 2008/09 in which they narrowly survived, and just one behind the relegation season that followed.

To make matters even better, striker Danny Graham finally scored for the first time in 1,327 matches (check it) as Hull drew 1-1 with Swansea at the Liberty Stadium on Monday night.

Over at Stoke, meanwhile, things are finally starting to look up for the Potters. Form is still patchy but Hughes’ side have lost just one of their last six league games and proved their Staffordshire tiki-taka was worth the wait against Jose Mourinho’s men.

There’s still nothing particularly remarkable other than their work-in-progress transformation, but you can’t help feeling intrigued to see if they can follow their Blues bashing with another impressive display.

Hull are one of the sides least affected by injuries in the Premier League, with only Sone Aluko (calf), Paul McShane and Stephen Quinn (both hamstring) likely to be sidelined.

Stoke’s absentee list isn’t extensive either, but does include key men Robert Huth (knee) and Jonathan Walters (suspended). Charlie Adam has a knock and may not feature (so it’s not all bad), while left-back Erik Pieters has declared himself fit after a groin problem.

The Austrian endured a tough start at the Britannia Stadium, but now he’s one of the first names on Hughes’ teamsheet. You won’t get hatfuls of goals from the 24-year-old, but instead selflessness all over the pitch.

Against Chelsea he created a game-high 4 chances for his team-mates, grabbing an assist from a corner, and attempted 10 crosses. With 4 ball recoveries, an interception and both of his aerial duels won, Arnautovic has proved himself to be a dependable worker at the back as well as an unselfish creator in attack.

Man United team-mates for over eight years meet for the 13th time as managers. Hughes has come out trumps six times to Bruce’s four since the duo’s first head-to-head in November 2004 between their respective Blackburn and Birmingham sides. Bruce’s Wigan were cannon fodder for former Hughes favourite Roque Santa Cruz, who bagged five in the managers’ three Latics-Rovers meetings.

Someone’s likely to draw a blank – only once this season have both sides netted at the KC Stadium. But against better judgement we’ll say 1-1 – this Stoke side has goals in it (sometimes).