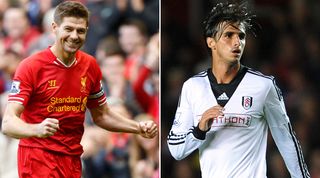 A banker for your ‘home wins’ accumulator.

Liverpool could have their confidence shaken by defeat to Arsenal, in which they looked second best for nearly the whole game, but they should fancy Fulham.

An early hurdle has been jumped: Luis Suarez will play, having had the option to miss this game and join Uruguay ahead of their World Cup qualifying play-off against Katie Price (or Jordan, as the country is now known). He’ll join Cavani & Co. after playing – and, in all likelihood, scoring – against the Cottagers.

Fulham are nearing Wigan-esque levels of unpredictability. In all competitions, a five-game winless streak was followed by three victories in four, then three defeats on the trot. It’s perhaps indicative of a lack of fight in the team; certainly against Manchester United last weekend, they seemed to just want to get the inevitable defeat over and done with. Fulham did keep the score to 3-1 after going 3-0 down within 25 minutes, but thanks in part to United’s half-time subs and lethargic second-half display.

At Anfield, Martin Jol’s men must battle and earn a point. Their performance will say much about the team’s character.

Steven Gerrard picked up a hip injury against Arsenal and Glen Johnson was a late withdrawal before that match with some kind of alien possession (depending what you read). He should return for this game, but Gerrard may not. Iago Aspas has a thigh muscle strain, Sebastian Coates’ long-term injury means he’s just behind Alan Hansen in the pecking order and Jose Enrique is unlikely to make it.

Well, he’s going to live. He just won’t make it for this game. So Aly Cissokho will need to improve on his performance at the Emirates.

Fulham’s Sascha Riether is a naughty man and begins his three-match ban for stamping on ickle Adnan Januzaj. The visitors are also missing Brede Hangeland (leg), Hugo Rodallega (groin) and Matthew Briggs (a left-back and former England youth international who remains the Premier League’s youngest debutant, protects his tweets and currently has a hernia).

With Steven Gerrard unlikely to feature, the third midfield spot in Liverpool’s 5-3-2 falls either to Joe Allen – restricted to the bench since returning from injury a few weeks ago – or Philippe Coutinho. Given the opposition, you would assume it’s the latter. This requires Jordan Henderson to move further back from the position he took against Arsenal and instead do his best Gerrard impression, shifting between defence and attack while Coutinho buzzes forward and Lucas tackles (and fouls).

Henderson has played every minute in the Premier League this season – OK, every minute of Liverpool’s Premier League season, obviously – in a variety of roles. It’s important he fills this one well. The 23-year-old’s pass completion is generally quite high, but he’ll need to be on his game off the ball, too, playing more as he did against Crystal Palace (7/7 tackles, four clearances, 11 ball recoveries) than he did against Arsenal (3/6 tackles, 1/3 aerial duels, two failed take-ons).

Lucas may need to help Henderson and, if possible, stay on the pitch: he’s already served a suspension for amassing yellow cards and, in total, given away 18 fouls in eight games.

Brendan Rodgers has recently played down Liverpool’s chances this season; sensible given Reds supporters’ high expectations, saying that his team has merely “a fighting chance” despite sitting in third place (albeit one point above the evil Everton in seventh). It’s careful psychological management and is unlikely to end here, with Everton the only really difficult opposition over the next five matches.

Martin Jol has said he isn’t used to being booed, but has remained bullish over Fulham’s form and whether he’ll be sticking with his defensively shy playmakers. He needs his players to take that stubbornness out onto the pitch.