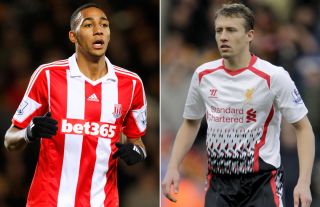 A chance for Stoke to inflict some big-time torment on Liverpool’s thinly stretched squad.

From George Osborne to Charles Augustus Magnussen’s perfectly sculpted eyebrows in the upcoming Sherlock finale, everybody loves a good villain. Step forward, then, Charlie Adam who is being watched by a beast for adding another studded imprint onto another Spurs player’s limbs and is in equally poor favour with Liverpool fans for being, well, a bit rubbish for a season at Anfield.

Not that the Scot will be particularly bothered. Adam scored a fine goal in last weekend’s FA Cup win against Leicester and will be keen to fire the Potters to a performance of cut and thrust as effective as last season’s 3-1 Boxing Day victory. Moments away from a home win last time out against Everton before Leighton Baines injury-time penalty, Mark Hughes’ men will approach the game with a slightly more rosy disposition than following heavy back-to-back defeats to Newcastle and Spurs.

Though the promised new brand of salubrious Stoke football is yet to fully reveal itself under Hughes, they remain a solid enough side underpinned by the consistent Ryan Shawcross at centre-back and sinuous French midfield Steven N’Zonzi. The decision to have three potentially first-choice keepers has reaped rewards, too, with Jack Butland now able to impress following injuries to Asmir Begovic and Thomas Sorensen.

Liverpool approach a ground on which they are yet to win a Premier League game with a curious mix of form: they’ve lost two of their last three games, but won five of their previous seven. You really can massage statistics to say anything you want. Brendan Rodgers’ men still struggle defensively, without a decent left-back and injury problems at centre-half with Mamadou Sakho out and Daniel Agger sidelined with calf trouble.

The goals keep flowing, but it needed the half-time introduction of Brazilian pair Lucas and Philippe Coutinho to overcome Oldham in the FA Cup, while beneath the surface, Luis Alberto, Victor Moses and Iago Aspas – who looks particularly lightweight, despite his obvious talent – are struggling for form.

It should be an intriguing battle of contrasting styles.

Full-back Andy Wilkinson’s troublesome heel will probably see him miss out, though Stephen Ireland should return for the Potters. Keepers Begovic and Sorensen remain sidelined, so Butland will continue in goal. Impressive in recent weeks Oussama Assaidi is ineligible against his parent club.

Captain Steven Gerrard should return to the starting line-up after coming off the bench against Oldham in the cup. Joe Allen, Jon Flanagan and Jose Enrique are all out, but Daniel Sturridge is back in training and should make his first squad following an ankle injury.

Their teams' respective midfield anchors, the Frenchman and Brazilian go about their roles in different fashions. The 25-year-old N’Zonzi may be all arms and legs, but he has the physique to dominate the game, making tackles and protecting the back four. That he’s missed only 18 minutes of the Premier League season is testament to the vital role he performs. Lucas’ function is slightly more nuanced.  More of an interceptor than physical marauder, the No.21’s anticipation is what is so vital in the Liverpool midfield. Without his energy, the Reds lose the instigation to their attacking vibrancy. Neither player give the ball away cheaply and it will be interesting to see how the pair perform their interpretations of the same role.

Hughes will be desperate to improve on a less-than-impressive managerial record against the Merseysiders: two wins from 15. That said, six draws isn’t a bad return. Those stats, again, huh? If Rodgers can inspire his charges to that first league victory at Stoke since November 1984, tongues may again wag for an unlikely title challenge.