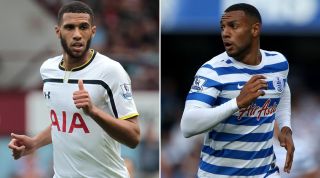 Harry’s back! Ah man, this is awkward...

When Harry Redknapp trudges out of the White Hart Lane tunnel on Sunday for the first time since leaving Tottenham two years ago, he may well wonder where it all went wrong.

The last six months of the 67-year-old’s Spurs tenure were thoroughly miserable; he was helpless to avoid the north Londoners blowing effectively a 16-point lead over Arsenal to miss out on Champions League football, after being acquitted of fraud and missing out on the England job he craved so badly (“I was relieved I didn’t get offered it,” he later claimed. “I love club football – I’d miss it”).

Since then it’s been all downhill; his desperate attempts to keep QPR in the top flight went to the toilet, before the Rs toiled to unconvincing Championship promotion via the play-offs.

Perhaps, though, the slide is over. QPR were beaten at home by Hull on the opening day after Charlie Austin’s missed penalty proved fatal, but Redknapp genuinely appears to be learning the error of his ways.

If Rio Ferdinand was a signing to cling onto the past, arrivals since have been anything but: see Steven Caulker, Jordon Mutch, Leroy Fer and Juventus full-back Mauricio Isla. And the west Londoners have also welcomed aboard Eduardo Vargas on loan from Napoli.

So all is rosier now, it seems – but for how much longer does Redknapp fancy himself in the hot seat? His managerial years are numbered, but the pensioner from Poplar will be keen to prove he’s not done yet – not least against his former employers.

On the surface, Redknapp’s relationship with former chairman Daniel Levy was strong – indeed, he later claimed that the axe came from owner Joe Lewis – but these days the cordial handshakes are reserved for new boss Mauricio Pochettino.

It started well for the Argentine at West Ham last weekend as new boy Eric Dier stole the points late at Upton Park, despite the hosts missing a penalty and having a man advantage for over half an hour.

Expectations remain optimistically high at the Lane, but again Spurs will have to toil for the top four with a Europa League campaign running in the background. There's no escaping Thursday's trip to Cyprus for a qualifier against AEL Limassol, or the fact they won just five of the 12 games that followed European matches last season, but anything less than victory here will be met with dissatisfied murmuring.

Kyle Walker is still sidelined with groin troubles, but centre-back Vlad Chiriches is nearing a return from his back injury. New signing Ben Davies will be hoping to oust Danny Rose on the left, though right-back Kyle Naughton is suspended for a game after his red card last weekend.

QPR have every man, woman and child present and accounted for. Don’t get used to it, lads.

With Walker injured and Naughton suspended, last Saturday's goal hero will likely get the chance to stretch his legs at right-back once again. The former Sporting man impressed after slotting in for Naughton at Upton Park, misplacing only 5 of his 44 passes over the 90 minutes before netting the winner.

He may find space in behind QPR man Traore here too thanks to the Rs’ new 3-5-2 formation, although the Frenchman was excellent defensively against Hull, winning all 11 of his aerial duels (green triangles), 3 of 4 tackles (crosses) and making 11 clearances (circles). It’s likely his forward runs will be mostly restricted at the Lane, leaving him to deal with both Aaron Lennon and Dier at the back, potentially.

Spurs boss Pochettino, now comin’ atcha in English, was chuffed with Spurs' hard-fought win on the opening day – if not Naughton's controversial sending off. "I think the red card was unfair, but the most important thing is that we never gave up, stayed calm, believed in our skill and our team, but we kept our offensive play," said the Argentine. "We reorganised our system and carried on."

Pochettino meets rent-a-quote Redknapp for the first time, the latter of whom has enjoyed himself in the transfer market this week.

Norwich signing Fer is "an outstanding midfield player who will bring a lot of qualities to the club", Vargas "someone we've been following for a while" and old boy Niko Kranjcar a player "who can do things other players can't". Like a pig in muck, right?

Spurs really do need to win these games, and it’s hard to see them not doing so here. 2-1, Adebayor to get at least one against the man who brought him to Spurs.