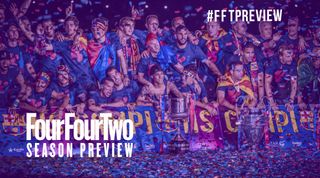 La Liga 2015/16 gets underway this weekend and as always the question remains: will anyone challenge Barcelona and Real Madrid for the crown? The other big posers centre around Rafa Benitez’s arrival in Madrid, the restructuring of Atletico Madrid and whether Barcelona can get even better after their Treble. Oh, and don’t forget ambitious Valencia and Europa League experts Sevilla, who will want their say, too. Spain's top flight might well be about to put across its strongest case ever for being about more than just two teams. La Liga kicks off with Sevilla's trip to Malaga on Friday night, so read on for all you need to know about what's coming up this term, starting with...

Three reasons why this season will be ace

1) Atletico have rebuilt – and it’s going to be fun

In the most significant restructuring at the club since Diego Simeone’s arrival back in 2011, Atleti are operating with a purpose to play dynamic, exciting football. Last season they were let down by a mediocre transfer window, but this time they feel strong enough to challenge again. They've kept the likes of Antoine Griezmann and Koke, and added Jackson Martinez and the exciting Yannick Ferreira Carrasco from Monaco. Throw into the mix Oliver Torres, returning from a successful loan at Porto, and we could well be talking about Atleti’s own boy wonder fulfilling his huge promise in May. Simeone’s men are working harder than ever before – and that’s saying something – so expect plenty of running on the field... and fireworks.

2) The chasing pack are fresh and hungry

It’s not just at Atletico Madrid where rebuilding has taken place. Sevilla have lost Carlos Bacca (to Milan) and Aleix Vidal (to Barcelona) but look to have bought well yet again and will want to improve on their Europa League win. They might well be about to put together their strongest La Liga challenge in years, and in Yevhen Konoplyanka have arguably made one of the most exciting signings in Europe. Ciro Immobile will be aiming to put a tough year at Borussia Dortmund behind him.

Valencia, meanwhile, continue to see the average age of their squad decrease, but haven't compromised on quality. Instead of splashing money on big names, Los Che have picked their incomings carefully to continue their ambitious push towards a return to the elite. Super agent Jorge Mendes still plays many cards at the club, to the chagrin of the club’s hardcore, but they'll find it difficult to deny the strength of this squad in comparison to previous years. Centre-back Nicolas Otamendi won't be stopping at the Mestalla this year, but in Celta Vigo's Santi Mina they've snapped up an exciting striker, while José Luis Gayà remains with the club and is on the brink of being a bona fide superstar full-back.

READ ON The summer activity you need to know about >>>

3) New boys can bring the ruckus

Three new teams, and three incredible fanbases. Real Betis, Las Palmas and Sporting Gijon are all big clubs in one particular merit, and that’s when it comes to support. Even while all three have been dwelling in Segunda, their season ticket sales and general matchday attendances dwarf most clubs in La Liga. All their home games this season will be ferocious affairs, with the backdrop of passionate fans willing their teams on against the bigger clubs.

El Molinon, home to Sporting, gets its chance to impress right away with the visit of Real Madrid and could immediately pile the pressure on Rafa Benitez. Betis will have their sights set on one team – Sevilla – who present the opportunity for Spain's best derby to come alive once again.

Barcelona-Espanyol? Real Madrid-Atleti? The Seville derby makes both look like friendly get-togethers between mates after work. Sevilla is the hottest metropolitan city in Europe when it comes to weather, but its football supporters fit the bill, too.

BACK OF THE NET Casillas abandoned on Portuguese motorway

Benitez’s arrival at Real Madrid poses many intriguing questions, above all how he begins to win over fans still reeling from Carlo Ancelotti’s exit – the eyebrow-jerking Italian was a clear favourite among fans and players. It feels as though some in the press are waiting for the first cracks to appear, and a mediocre pre-season has been magnified a little more than it really should have been. Such is the drama in the capital, however, that Rafa’s arrival was dwarfed in comparison to Iker Casillas being bombed out after a 25-year association with the club. This is all without even getting started on Sergio Ramos’s contract saga.

Over in Valencia, Jorge Mendes' influence is beginning to peeve. The club's president left, and his technical team followed after a series of bizarre transfer sagas. If things don’t go well on the pitch at Mestalla, you get the feeling the situation could get awfully tense at the creaking old stadium.

A little further down the table, Eibar were granted a reprieve from relegation after Elche failed to come up with money they owed to the tax man. Don’t expect Eibar – with new manager José Luis Mendilibar after Gaizka Garitano stepped down – to achieve similar exploits to those at the start of last season.

READ ON The new kids to look out for in Spain >>>

Youngsters to spy on

Zakaria Bakkali has arrived at Valencia, and while the young Belgian carries a little excess attitude baggage after letting his contract run down at PSV, the young Belgian's ability isn’t in doubt. He boasts searing pace, close control and masses of individual brilliance – so don’t expect a dull moment when he's around. Marco Asensio and Dani Ceballos, the latest gifted technicians in Spain, helped the Under-19s to European Championship glory over the summer, so keep an eye on them. Asensio is expected to spend the year on loan at Espanyol from Real Madrid, while Liverpool are keen to tie up a deal for Ceballos which would see him head to Anfield next summer. Elsewhere, Granada's brilliantly named Isaac Success could enjoy... er, success, and find his name on the lips of Europe’s top scouts.

Tussle for the title

Real Madrid and Barcelona will of course lead the way, but who will triumph? Benitez has world-class quality in his squad despite the doubts over his managerial ability, while Luis Enrique's Catalans have that Lionel Messi fellow and confidence running through the squad after their Treble. Noises from Atletico Madrid suggest they could be back in the picture, too. Simeone is delighted with his transfer business and feels his group are leaner, meaner and more exciting than ever. Valencia and Sevilla are there in spirit, but aren't quite equipped for an assault on the top prize. They will push in the big games, though battling on several fronts could hurt them in the end and one competition will have to take precedence. That might well be the Champions League, with both clubs making a return to club football’s elite stage.

Battle at the bottom

The three new boys, while boasting superb home support, will struggle given the lack of depth in their respective squads, while there is also a sizeable lack of experience when it comes to relegation battles in the top flight. Levante and Granada will be down there as usual, while Espanyol could be a surprise package to suffer after losing key figures like Sergio Garcia, Lucas Vazquez and Hector Moreno. Eibar look certs to go down with the weakest squad in the league, while Deportivo La Coruna just seem to never help themselves despite having enjoyed a decent summer transfer window by their standards.