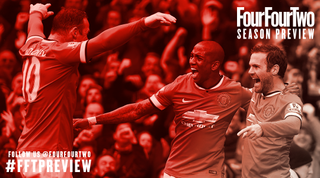 It wasn’t always pretty, but Manchester United completed Phase One of Get Back On Our F***ing Perch: fourth place and Champions League football. Angel Di Maria was the Premier League’s best ever import, then its worst, Louis van Gaal was a pioneer, an eccentric and a fraud all in one and Marouane Fellaini invented a position. So 2015/16 presents any number of possibilities, most of them good. Bastigan Schweinderlin to fix the midfield? Rooney to score 30 goals in the season? Van Gaal to lead a triumphant return to the European top table? United fans would probably settle for being title challengers again.

Stuart Davis, Feature Writer at Republik Of Mancunia, offers his thoughts on the upcoming campaign...

Spending upwards of £225m in two summers doesn’t hurt. United have brought in real quality to overhaul an unworthy squad. Having trimmed some of the fat, they have greater strength in depth than their title rivals and a healthy competition for places, plus enviable flexibility. They have an excellent goalkeeper in David de Gea – if he stays – as well as a large, supportive fanbase. Plus in Van Gaal, a manager who traditionally peaks in his second year, while Manchester City and Arsenal labour under bosses past their prime and Jose Mourinho approaches the point at which he usually tires of a club (or they tire of him). United have a chance if they can stay on the shoulder of the leaders: in a friendly final five fixtures they take on Aston Villa, West Ham, Leicester, Norwich and Bournemouth, while Chelsea and Arsenal face Manchester City, who in turn face Chelsea and Arsenal. Obviously.

Versatility is a blessing but also a curse. Van Gaal’s ingenious ideas have included playing Robin van Persie in midfield and Di Maria as a striker. There’s less necessity for Antonio Valencia to fill in at right-back now Matteo Darmian has arrived, but the manager’s suggestion that he might play Daley Blind in central defence isn’t to be encouraged, versatile as the 25-year-old is. Van Gaal must also address a dismal away record (six teams bettered it last season, and eight won more games) and settle early on a) a workable formation, and b) the right people to play in it. For example, United have 12 first-teamers who can play in central midfield. Who’s going to start? Van Gaal must not chop and change as much as last season, when United – admittedly, beset by injuries – used 37 players in their first 22 matches.

1) Is Depay ready to be United’s main man?

Yes with an if, or no with a but. Yes, he can thrive IF he’s exposed gradually to a far busier match schedule and given a consistent position, either up front or on the left of a 4-3-3. Is he ready to be their main man? No, BUT he doesn’t need to be: United have consistent goalscorers elsewhere in the team, so Depay has time to adapt without being under pressure.

2) Can Fellaini have a big impact again?

He shouldn’t have to. United’s ball-carrying and creative midfielders were bypassed when Fellaini became a focal point in the second half of the season. Plus, opponents got wise to it, and United went on their longest goalless streak since 2007, losing three consecutive games for the first time since 2001.

From the pitch to the dugout to the stands to the internet, Manchester United won’t lower expectations because this is their first season back. Reaching the last eight would be par, even if no English team managed it last year.

The Croxteth terror has had to wait to get his wish: actually playing as a striker. With Van Persie and Radamel Falcao both out the door, and Javier Hernandez being gently coaxed towards it, Rooney – who turns 30 in October – is likely to lead the line. It’s a simple move, yet a necessary one: his consistently impressive goal returns suit a position up front, just as his temper and touch don’t suit a position in midfield. Twice at United he has scored more than 25 league goals in a season. He’s certainly capable of doing it again.

What we’ll be saying in May

“In the end, Van Gaal’s decision to move Chris Smalling up top for the final 10 minutes of the derby against Manchester City in late March proved a masterstroke, as United’s 2-1 win – Smalling grabbing the winner – helped the Red Devils to ultimately nick third place over their cross-city rivals, even if their title bid fell short a few weeks later.”

To see where FourFourTwo think Manchester United will finish – along with a bespoke two-page preview – get our special new season issue, out Saturday 1 August.