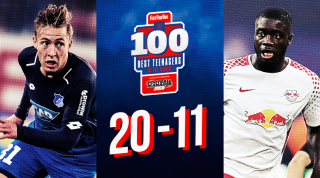 Need to know: Born in South Africa to Greek parents, Retsos is making a name for himself in Germany with Bayer Leverkusen.

A versatile defender who has played at full-back despite being most comfortable as a centre-half, the 19-year-old is strong in the air and firm in the tackle, while he’s also willing and able to play out from the back.

The former Olympiakos man became the most expensive Greek player in history when Leverkusen splashed out €22m in the summer.

Highlight so far: Retsos appeared in October’s 2-1 win over Cyprus, a result which left Greece on the brink of reaching the play-offs for 2018 World Cup qualification.

Need to know: Christian Pulisic, John Brooks and Bobby Wood are among the United States internationals to have cut their teeth in the Bundesliga, and now McKennie is hoping to follow in his compatriots’ footsteps by stepping up to the senior national side in coming months.

A full-blooded holding midfielder, the 6ft 1in 19-year-old specialises in regaining possession for his team and moving the ball on simply to a team-mate.

McKennie has just earned his first full USA call-up for the forthcoming international against Portugal.

Highlight so far: McKennie made his first Bundesliga start against Bayern Munich in September, and inked a new five-year-deal at Schalke just eight days later.

Upamecano is an assured centre-back who reads the game well and is aggressive in the tackle, but the 19-year-old is also a tremendous passer. France aren’t exactly short of options in defence, but he’s an outside bet to make Les Bleus’ World Cup squad.

Highlight so far: The teenager showed maturity beyond his years in RB Leipzig’s impressive 3-2 defeat of Borussia Dortmund in October.

Need to know: A diminutive attacking midfielder capable of operating on the left flank or in the centre, Barco has established himself as Independiente’s go-to creator.

The 18-year-old Argentine is a fantastic dribbler whose two-footedness allows him to take on his opponent on either side, and he's adept at wriggling out of tight spaces with his skill, balance and agility.

Forward Barco has scored six goals in his club career up to now, including a confident finish against Deportes Iquique in the Copa Sudamericana. There's no doubt about his self-confidence, but also from his team-mates too – the teenager is already entrusted with penalty duties.

Highlight so far: Barco scored the equaliser in May’s 2-1 win against Huracan which helped Independiente qualify for the Copa Sudamericana.

Need to know: Fernandes only made his first appearance for Botafogo in January, but he’s already established himself as a key member of the team under Jair Ventura.

A combative, tough-tackling midfielder, the 19-year-old tends to sit in front of the defence and break up play, but he can occasionally be seen using his rangy frame to carry the ball forward.

Fernandes has played twice for Brazil’s U20s and may be eyeing a senior debut before the 2018 World Cup.

Highlight so far: The midfielder started both legs of Botafogo’s 3-0 aggregate victory over Nacional in this year’s Copa Libertadores, helping his side through to the quarter-finals.

Need to know: A homegrown left-back looking to follow in the footsteps of Jose Gaya, Valencia’s Lato has caught the eye with some fine performances in 2017.

The 19-year-old was handed his first La Liga outing in January and hasn’t looked out of place since then, demonstrating an ability to contribute in both the attacking and defensive phases.

A fast, athletic full-back who is also comfortable in possession, Lato has been linked with Liverpool in successive summers.

Highlight so far: Lato was superb for Valencia’s trip to Real Madrid in August, defending well against Gareth Bale and providing an assist as Los Che drew 2-2.

Need to know: A diminutive attacking midfielder who stands at just a shade over 5ft 4in, Matheusinho is one of the most talented young players in Brazil right now.

With lightning-quick feet and a low centre of gravity, the 19-year-old drifts past opponents with ease whether playing out wide or through the middle.

Matheusinho has also improved his end product in recent months, but his progress will be checked following a knee ligament rupture in October’s 1-1 draw with Parana.

Highlight so far: Matheusinho scored the winner in a crunch Serie B clash with Santa Cruz earlier this season, keeping America Mineiro on track for promotion.

Need to know: After eight years in the Ajax youth ranks, Fosu-Mensah was snapped up by Manchester United at the age of 16 in 2014. He made his senior bow under Louis van Gaal two years later, appearing alongside fellow Premier League debutant Marcus Rashford in a 3-2 victory over Arsenal at Old Trafford.

Currently on a season-long loan at struggling Crystal Palace, the versatile Dutchman can play at right-back, left-back, centre-half or in midfield.

Highlight so far: Fosu-Mensah started United’s FA Cup semi-final victory over Everton in 2015/16, when Van Gaal’s men went on to beat Crystal Palace in the final.

Need to know: Borussia Dortmund have a tremendous track record of producing talented young players, and Passlack is among the latest starlets off the production line.

Currently on loan at Hoffenheim, the right-back has been compared with Bayern Munich’s Rafinha due to his pace, dynamism and composure on the ball.

“I could start crying knowing that I won't be coaching this guy,” Jurgen Klopp said before his Dortmund departure in 2015. We hope someone passed him a tissue.

Highlight so far: Passlack captained his country at the 2015 European U17 Championship, where he scored three goals and played every minute as Germany reached the final.

Need to know: The Everton academy graduate became a regular first-teamer last term, having made his Premier League bow the previous season.

An energetic, box-to-box midfielder who possesses both physical and technical gifts, Davies was named young player of the year at Goodison Park in 2016/17, after making 25 appearances in all competition.

The 19-year-old nephew of former Toffees man Alan Whittle has also represented England at U16, U17, U18, U19 and U21 levels, and was invited to train with the senior squad in 2015.

Highlight so far: Davies was superb in Everton’s 4-0 thrashing of Manchester City in January, scoring a brilliant individual strike which earned him the club’s goal-of-the-season award.