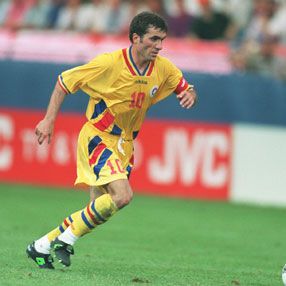 Goalkeeper
Claudio Taffarel
I spent many seasons with Claudio at Galatasaray and he is a great goalkeeper. The defence always felt safe when he was behind them, and he was a good organiser of the players around him. Typically for a Brazilian,  he also had excellent technique with his feet.

Right-back
Jorginho
He was brilliant going forward, so dangerous and capable of scoring fantastic goals. He was the kind of player fans would pay to watch, but he was also solid in defence and played brilliantly against Italy in the 1994 World Cup Final. He never let anyone down.

Centre-back
Franco Baresi
This guy is a monument in world football. Milan and Italy built their teams around him, as I found out when  Milan beat Steaua Bucharest 4-0 in the 1989 European Cup Final. He was able to construct the game from the back, coming out of defence and launching some amazing passes to devastating effect.

Centre-back
Fernando Hierro
I played with Fernando at Real Madrid. He was really impressive, what you would call a complete player: he was superb in the air, could pass equally well with both feet and had a terrific shot from long range. His scoring record  was fantastic considering he was a defender.

Left-back
Paolo Maldini
Paolo is another sensational player from the Italian school of defence. He is always very elegant on the pitch, often going forward  to support attack and he has scored some important goals in big games for AC Milan as well as for Italy. He’s a real role model for defenders coming through today.

Right-midfield
Luis Figo
Luis is another former team-mate of mine from Barcelona. We played together in his first year in Spain: he was a great character and a fantastic player who could do anything he wanted with the ball. He gave the team great assists, great crosses, incredible goals, and he had everything in a player that you would always want to watch.

Defensive-midfield
Pep Guardiola
Pep was probably one of the best ever midfielders whose job was to break up attacks and just win the ball. He would sit in front of the defence and would be impossible to pass. He would keep a great balance in any team’s midfield.

Attacking-midfield
Diego Maradona
There’s only one word for this man: genius. What he was able to do with a ball was not football, it was art. He was one of the best players ever seen. I also met him when he was only 21 and even then, I was shocked to see the level of the play he had.

Left-midfield
Zinedine Zidane
It is a great regret of mine that I never played alongside Zidane, but only played against him. That was hard enough: he was a leader on the pitch, and only looked happy with the ball at his feet. He had everything in his game you could admire, from his free-kicks to his clever passes to his team-mates.

Forward
Marco van Basten
Marco was able to score goals from impossible positions, such as that amazing volley in Euro 88 against the Soviet Union. He had all the qualities for a perfect striker, and his technique made him very hard to stop in the box. His movement was also good. He was a nightmare for defenders.

Forward
Ruud Gullit
Maybe it’s a surprise that I’m picking another Dutch forward, but Gullit was a legend. He was more powerful than Van Basten, so it was almost impossible to get the ball from him. But he had a different style, and was Van Basten’s perfect partner: every coach’s dream is to have a technical player partnered with a physical one.

Coach
Johan Cruyff
He must be one of the most creative coaches in f�ootball history, because I always loved his ideas and he was always talking about something new. I learned a lot from him and I feel happy and grateful that I had the chance to work with him at Barcelona.

Peter Schmeichel
Not, in my view, as technically gifted a goalkeeper as Taffarel – but he was strong as an ox and imposing, gaining respect from opponents and team-mates alike.

Gheorghe Popescu
Not just because he is Romanian and my brother-in-law! He was just as good at centre-back or in midfield.

Fernando Redondo
He was a real metronome in the team, a midfield master. It was such a shame he got that terrible injury.

Romario
A huge talent who may not have done a lot during games, but when he did it was normally decisive.

Ryan Giggs
Not a typical British player, Giggs’s strength is his skill and imagination rather than his power.